Over night snow had left its mark on the town of Ojiya , first thing in the foyer of the hotel , I heard many complaining about treacherous road conditions already , Diddnt bode well for me with a pair of wellies that I couldn't get on due to the swelling of my leg , plastic trainers it was then ! We set off towards Hosokai koi farm , and had to drive slow due to the wind blowing snow all over the road . I think sometimes we take it for granted over here , driving round mountains with 50 foot drops , in snow covered roads , oh well , as some one once said , what we do for these stupid koi ! On arrival at the farm , we spent an hour looking round at what was available , once again I was seeing a repeating pattern , lots of nice koi at reasonable prices , but varietys and quality of what we have already . The breeder then got a phone call saying that a car was stuck in the snow , it was some customers on the way to see him and had driven a little close to the side of the road . We decided to leave as it looked like he would be busy with the car for while . We made a call and then it  was off to Marudo koi farm . When we arrived we were shown some very nice tosai , and was offered a chance to hand select , the kohaku looked extremely nice , so set about netting the pond and selecting some 20-27cm tosai . After selecting 25 , I looked at what I had chosen through , and then decided to take another 25 as the quality was so high . Another pond was netted , and we started selecting sanke , again around 20-25cm . After selecting for a few minutes , I had to admit I was struggling , and I suggested we stop ,I could see that the breeder wasn't happy , so decided to take a box for politeness sake . Once selected , the fish were placed in clean water , and I realised the fish were way better than I first imagined , and was very glad I had carried on . After all the pics and videos were done , I was asked if I wanted some higher class tosai , this happened before , found a pond and got selecting only to find that that there was higher quality available ! This time I wasn't worried as the 75 tosai we had selected were great quality , so I considered this other pond to be a bonus . Once shown the pond , I was told the price was way more than the others , so a hard debate began about the price . Earlier on we had been offered some nice Yamabuki at a sensible  price , 65-70cm and yonsai . Being the great negotiator , I explained that we had selected three boxes already , could we buy two ogons and get a better price on the HQ tosai , until then we had been dealing with the daughter as the father had slipped down some stairs and had to go to hospital , he had just returned in mid negotiations , and as a master of price debates , he came back and said ok Gary san , you can have your price on the tosai , but ONLY if you have 4 Yamabuki ogons , I had to laugh as I had been out manuvered by the boss ! So 4 ogons later , we set about selecting through this new pond , I was shocked , the quality was way beyond what I had expected , and very quickly I had 25 very tasty tosai kohaku and a few sanke . Feeling very happy , we went and grabbed a sandwich , and went to Kaneco koi farm . sometimes its nice to select tosai here , his shiro utsuri are very nice as are many other varieties , this year the tosai were a little smaller , so we passed and decided to call it a day and returned to the hotel . Driving home I thought we were having an early day , it was already 5pm ,time flys when your having fun ! 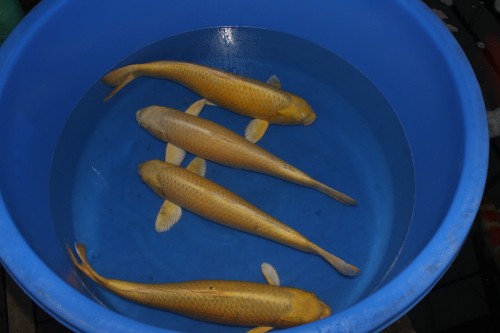