The main topic of conversation , among dealers in the hotel , is that most are struggling to find koi . Different dealers are looking for differant things , some are trying to buy whole ponds to get a good price , some  are just after selecting cheap koi , some are selecting very high quality . But all are saying the same thing ,they are  buying koi , but finding things hard going . We have done well i think , with a cross section of koi , of all varietys , sizes and quality .The one reason i think is , i have long given up making plans when coming to Niigata .

People say to me , what are you looking for this trip , i reply "koi " . Come on Gary dont be sarcastic  , IM NOT , i really dont have a clue until i am at the breeders . Yesterday , we hoped to get some nisai goshiki at Kawakami , ended up buying just black and white koi . Thats about the story all week , first time ive ever been to Kase and not bought a single koi . I always try to buy my customer orders , but people still struggle to understand , that these koi are not just sitting here waiting for me to arrive , its all about timing . For instance , i have more orders for nisai tancho kujaku , than were produced in Niigata this year , i need 50 tosai tanchos , 20 tancho showas . and dont get me started about goshiki !!! It seems to me , that to find koi , we need to be stocking up during the winter , but saying that im way happy with the koi we have purchased this trip, havnt gone for a lot of better grade  go sanke , as we bought many in the winter . To give you an idea , Yagenji sold out of nisai and older koi , kase very low , Aoki no nisai , Kawakami only one pond of nisai for selection left , Sekiguchi we are told has no more toasi for selection , untill he has gone through his jumbo tosai , even some of the regular tosai are running out from breeders . So for the first time ever , i was not so worried that my trip is coming to an end . Once again we headed out in the vicous snow , this time going uo to mushigame to Sakai Yamamatsu .

We havnt bought much from this farm for a while , he is normally very busy , or we have not had time when he is free . So it was good to catch up and have a natter, and that we did , for about an hour and a half .Some people might find this frustrating , but it is the basis of good relations , and apart from that all three generations of Sakai are all great company , and we always have a laugh . All the time we were chatting , snow was falling off the roofs , making such a thud against the window , i thought at one point it was coming through ! Toshiuke thought it was hilarious as i jumped half way across the room , and refused point blank to sit back down . 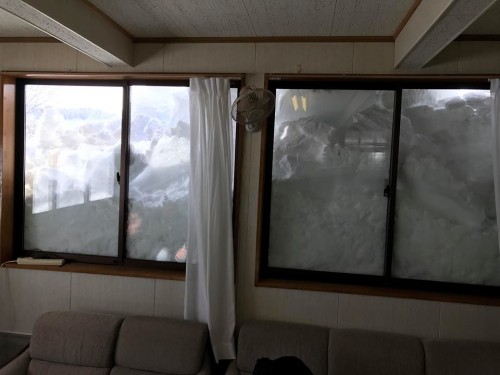 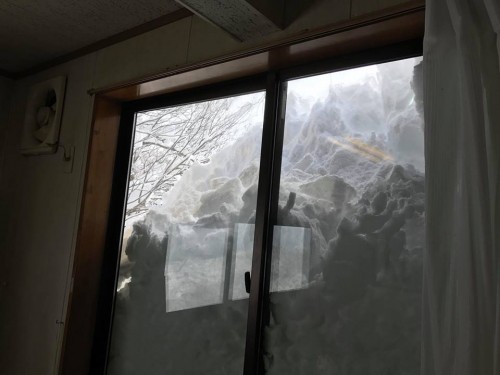 So after a while i said , right , lets look at some nisai , he replied no , 10am  its break time ! I said what ? Weve been drinking tea for an hour lol , he said it doesnt matter 10 is tea break . So i took my third cup standing up away from the window , much to every ones amusement ! Unofficial tea break over , and now Official tea beak over , it was koi time . We entered the main koi house , i pointed at the smaller ponds , he said no , all sold out , and thats me screwed i thought , and then he pointed to the main nisai pond , and i said expensive , he shook his head and headed to the pond , he spoke to his son , and all i heard was my name mentioned , he waved and went off to dig his house out of the snow with a 5 tonne digger . One thing i have learnt over the years , is not to argue or disagree with a breeder untill you hear or see what they want to show you . The son pointed , so i started asking prices , one sansai looked awesome , so it was bowled and then returned due to secondary issues . Before long we had three female sansai and one female nisai , and one male nisai . The male was stunning , and certainly show quality , but as i checked it over , i found a little damage on the side , so it was returned . Prices were give , and they wernt as scary as i had thought , so i did my bundle act and said all of them in Japanese , a few grunts , deep breaths , and may be even a sigh , and he held his hand out for a gentle mans agreement . They had been just treated for parasites , so please excuse if they are a little stressed . 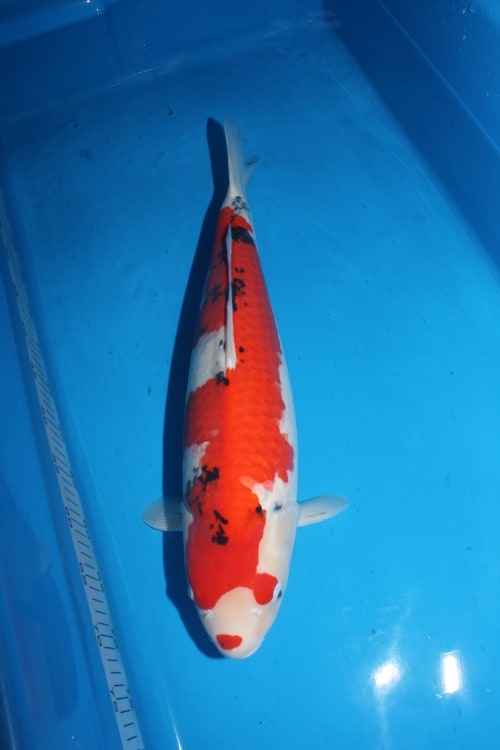 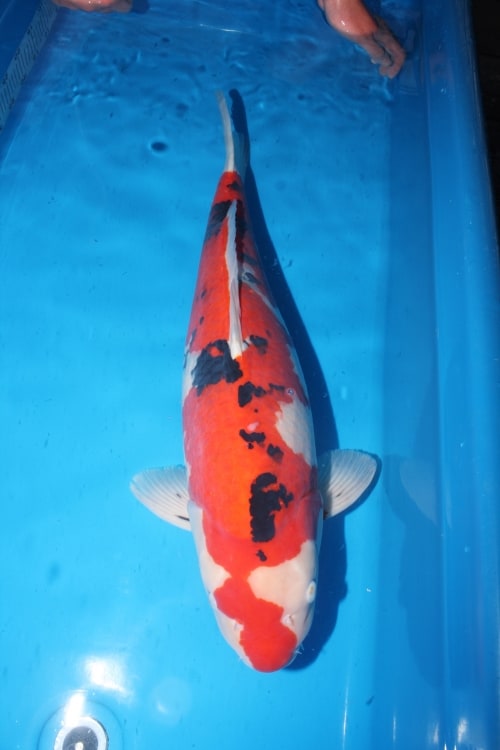 Kohaku 65cm , female and sansai . Spot that looks like a blemish on the beni , is a shadow of something in the water . 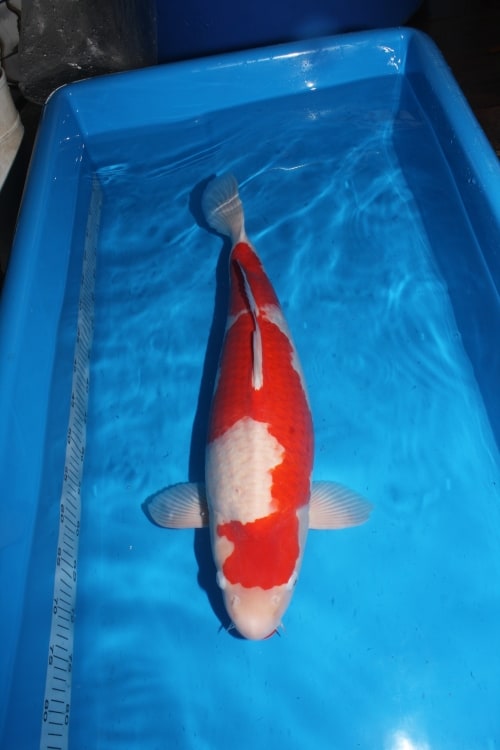 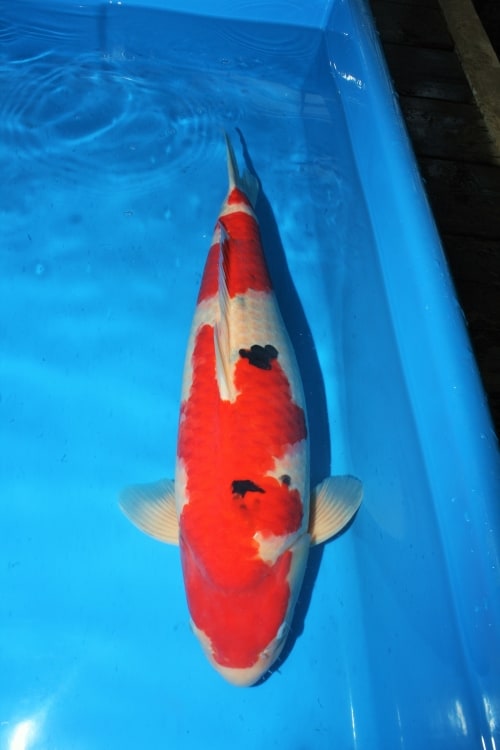 After the pics and videos were taken , we moved onto the tosai houses , and was looking at some very interesting options . One that could end up in a special offer for some of our customers , we are returning tomorrow , to try and work out the details . More to follow ( hopefully ! ) After a few frolics in the snow , we headed off to Maruhiro koi farm . And another round of coffees , is it any wonder i cant sleep sometimes lol ???  We wondered out and looked at the koi . He had restocked from his other facility , and we found some nice nisai , a 45-50cm female showa , some shusui and asagi around 35cm , a very nice quality maruten sanke , and a stunning little size 2 sanke ( yep , size 2 ! ) Once again it was pic and videos , and then off for a late lunch . Liver and fried rice was agaian on the menu , and superb as always . We tried to get to Oofuchi , but he wasnt answering , so either serving or clearing snow , so we will try again tomorrow . So as we were round the corner from Marusie , we popped in , not much that really appealed , so another coffee  and we said our good byes . We still had a little time so we drove up to Mushigame and visited Shinoda , he had a few nisai and sansai , but once again not much i wanted to bowl up . How ever he did have an interesting offer on some tosai , which i am thinking over . Whie up in the mountains we thought it rude not to visit Yagenji , and another cup of coffee , im really starting to realize why i cant sleep lol ! As usual Yagenjo had 1000s of tosai , looking great and healthy . We looked over the tosai , they are totally sold out of older koi, so we drunk up and left . Not so many koi today , but last day tomorrow , so we hope to get some more ! 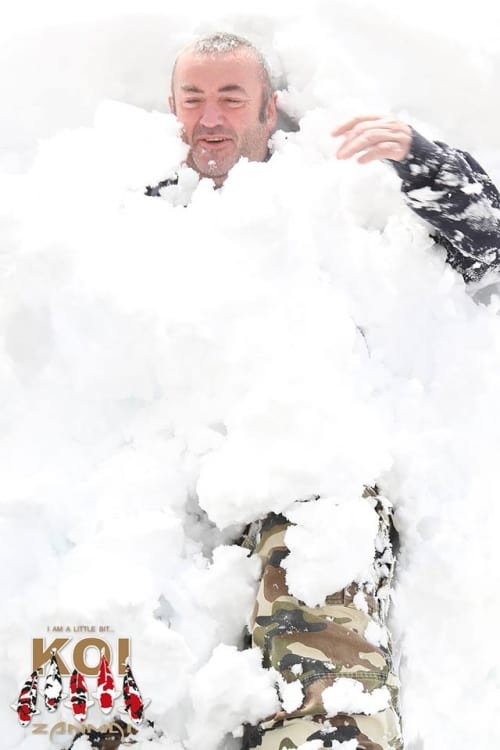