It may or not be common knowledge , but this trip is very different than other . This trip we have started using a new agent in Japan , this is always risky in any business , let alone the koi industry . Its kind of starting your business , all over again . New relations , new ways of working , new ways of shipping , being in control of your own shipments. It may all sound romantic , but when your business depends around these guys , it can be quite unnerving , especially when you have to travel have way round the world to meet them , and start all over again , so hence the title of todays blog , into the unknown ................

Yesterday , was manic ,really busy round the mountains ,  and i still really  enjoyed it , and managed to find some nice fish , i wasnt in my comfort zone .Our new agent , is Japanese , and very traditional , so teaming up with me , must have come as a massive culture shock  ! Although he is re known for his sense of humour , i guess we wouldnt be driving round the mountains , playing death metal and the Jam like the old days . Today was much more relaxed , and the breeders were strangely quiet . This was a great time to sit down with some of them   , and chat about koi and the future for Gatwick Koi . A good time to get to know each other again , i say again as i had traveled with him 15 years before hand . First job today , was to go back and take videos and pics of the koi we bought last night , and also a chance to check them over , as it was dark last night , and Maruhiro koi farm was very very busy , and it takes the very best of my patience to do any pics or videos , let alone with ten people pushing past , shouting and generally stressing me out lol ! When we arrived , first job was coffee , sometimes you want to just get on , but trust me , sometimes 10 mins spent with a breeder for coffee and a natter  can go along way ! True to his word , Maruhiro had kept all our koi in a floating net , caught them all up , and spread them over several bowls , so we could start taking the videos . I had a lot of trouble with the bright light in the fish house , so fingers crossed , all over the videos and pics come out ok . 20 nisai of all varities , and one much more expansive kindai showa , almost tatgoi like . I wasnt  disapointed with the koi , and they were much bigger than i thought , 35-40cm approx , and the quality was very good . So seeing them in decent light , was the start of a great day ! After this was done , we had Maruhiro showa us a female showa , sansai and 57cm almost . We purchased this , and two more nisai to keep it in the box for company .

After all the pictures were  taken , and the new koi purchased , i wanted to get back to Yaganji , as he was harvesting some sansai . So off we went , and once again they were surprisingly quiet , although there was a load of bowls out filled with water , so i guessed they had been ! After looking in the main pond , i saw a very striking shiro utsuri , i know ill get flak from the pattern police , but what the hell ! This koi had a mad head pattern , and superb shiroji and sumi ,and YES I KNOW , the pattern is way to heavy , but you will understand if you saw the koi in a bowl as i did . She was sansai , around 55-60cm , and i loved her . Even the agent tried to talk me round , but i was having none of it , and she was soon in the bowl . With the sansai , i saw two gin rins , one showa with 4 step pattern , and also a yon dan gin rin sanke . They were both very attractive koi , and along with the shiro , i had the basis of a deal going . Two many for one box , well i wasnt putting any back , so what the hell , ill make a box of some cheaper ones , so asagi go sanke , a massive gin rin bekko around 60cm all ended up in bowls , and before i knew what was happening , i was really knee deep in many bowls . Aagain we tried to get a little deal going , but still to many koi , so cut a long story short , i wanted a nice doitsu karashigoi for myself , so i went to a better pond and selected one there , per , another koi , another box and another bowl . My head was spinning with bowls , koi and figures .I had to stop and drink a coffee to get my head straight . A deal was struck , i had purchased the shiro , the two nisai gin rins , two nisai doitsu karashigoi , a sansai gr bekko , two nisai asagi , a very high quality male kujaku nisai , a nisai female maruten sanke , gin rin kindai showa female and nisai , and a very nice gin rin hi utsuri .

After here we visited Sakazume , who had many interesting varietys , including gr matsukawabake , aiigoromo , budo goromo , yamabuki ogons . But there was a large group there , so we said we would return later . Then we visited Kawakami , who hadnt really harvested a great amount yet . But he did have some very nice small shusui . I liked the koi , but thought they were a little too dear , so we passed and went off to Maraska . As we arrived , i went to get my camera out of the boot , it was gone , no amount of swearing and tantrums was going to bring it back . A discussion then ensued about who left the boot open , i was reminded , that , this in fact Gary , is Japan , not London , may be you left it somewhere ??? Last breeder , all the way back to Kawakami , where the staff came out grinning , bearing a camera and flash in their arms . I was relieved and we all had a little chuckle . By know , we had almost lost the daylight , when we visited a breeder for a certain variety , but was offered some very nice , very wierd , and very unusual metalics , a deal was struck , and they are all reserved until tomorrow , when we can select them in the daylight , along with what we went to buy in the first place . A great day , and some nice koi , all types of quality , i relaxed  was no longer in the darkness , "ive seen the light " to quote a very old blues brothers film!

Sansai shiro at Yagenji , superb skin and a nice body !

Such a crazy day , looks like i diddnt video a whole bowl of koi lol ! 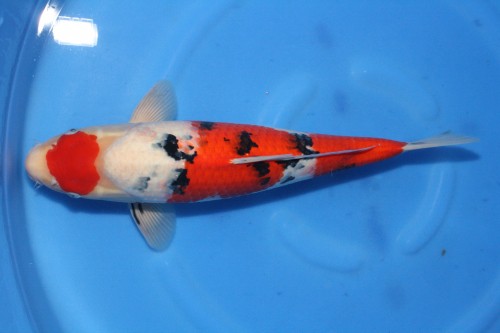 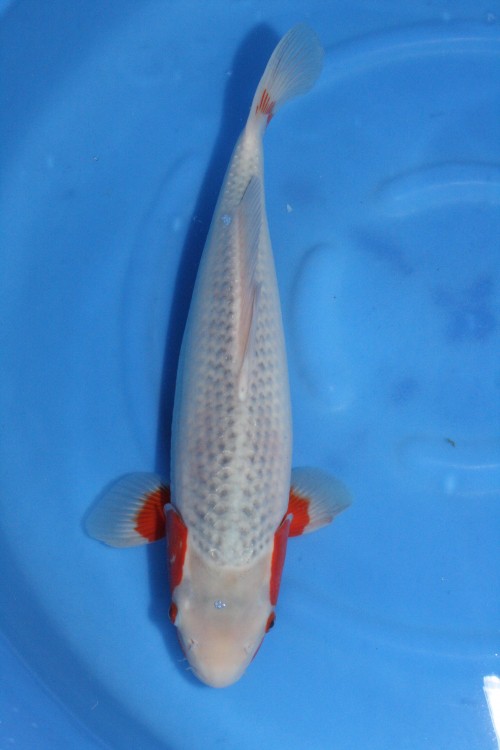 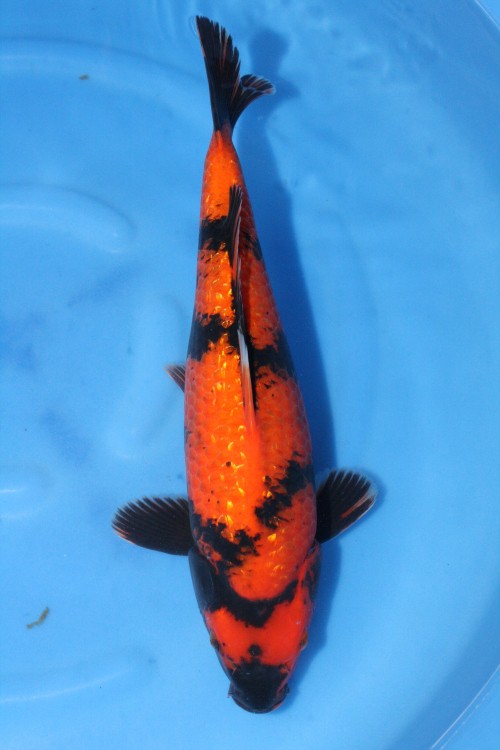