Last day today , so had to clear out the hotel room , pack my bags and check out of the hotel ready for the journey back to Tokyo tonight . So for that reason we left the hotel a little later at 10am instead of 8.30 for our first appointment at Marudo koi farm. Was really looking forward to this as we has selected some very good quality male and female nisai . We were shown round as they had been harvesting , and there were some very nice sansai and yonsai , and they were huge and were very expensive , so we left well alone , sometimes you know not to go in bowling koi like that , you could damage the koi and totally waste the breeders time , which he / she wont thank you for . We were then taken to the two nisai ponds , and to be honest the quality was way down on what we had picked before , and to be fair , so was the price , but it just wasn’t the quality we were looking for , so we said our good byes , and moved up the road to Kaneco.

Kaneco had been harvesting , and had some very nice nisai , and I was nearly tempted to buy some more , but once again , it was no better than I had bought before earlier in the week . One thing that did grab my attention was his Tamasaba , Japanese goldfish , never really looked twice at these before , but now they can be shipped out of Niigata , I was very interested in what was being said , may be if we move to new premises , then they could be a new line for us

I forgot say yesterday we picked up three  more nisai from Sakai Yamamatsu , a tancho sanke and two sanke , all three nisai and one a wopping 57cm ! Last night whilst tired I wiped the file out , and went there today to re do the pics and it was his auction so I didn't  ,  someone will go back for me to re do them , should have them by Tuesday / Wednesday . Coming back from Mushigame , we stopped in to say good bye to Hinori and pick a few more nisai at Maruhiro koi farm . When we arrived we met by Hinori who  was very excited , he had one grand champion at the local Ojiya show , an 80cm plus showa took the honours . Im so happy for him , we have worked together since he was a young man at his Fathers farm Hirasawa , ive seen the work this fella puts in to his business , and this is now his really has reaped  what he has sowed , im so pleased for him , this guy is really going places ! He was happy , so I thought good time to buy some koi lol .  I had an order for a three step kohaku and a tancho , so set about making a few boxes up . I selected 9 nisai , all go sanke and one shusui around 30-40cm , then some nisai 45-50cm and all female . A price was agreed and that finished the day off nicely . This week has really been a step up with Maruhiro , we have had some excellent results with the azukari , and ive seen that this year the koi have been bigger and better , he just keeps going on and on , and im trying to keep up with him . This week we have purchased some more koi to leave at his farm this summer . They are more expensive than I have ever purchased , but shows the level of faith I have in the man and his koi . This week has been a steep learning koi for me , it is every visit , but now im understanding more about the breeders I work closer with , and their koi . I think our show results around the uk are starting to reflect this  , and like Hinori I have no intention in slowing down and will keep  raising the bar . Last year and this year , a lot more have placed your trust with us , and I thank you for that , go team Gatwick ..................................Thanks for taking the time to read this , hope you enjoyed it !

Nine nisai around 30-40cm , showa , kohaku , kindai showa ,shusui  tancho and tancho sanke . Skin is very good on these , and I think you know enough about his sumi development !

AND LAST BUT BUT NOT LEAST GC AT THE OJIYA SHOW TODAY 81CM SHOWA FROM MARUHIRO  ( please don't ask is for the price , its not ours lol ) 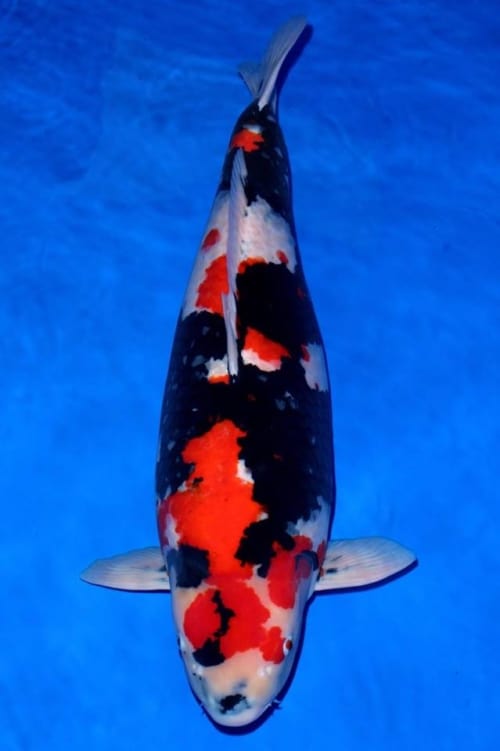