My original plan was to head down the South of Japan , to carry on the success of my visit there in the Autumn . But to be honest , things are going so well up here , and im being offered nice koi by our agent based down there , it makes sense to leave him to do his job down there .

Our latest purchases from the south are Okawa shiro usturi . 12 jumbo tosai , already 24-34cm approx , that should arrive in the UK around the end of March . Also some smaller siblings , shiro and gin shiro utsuri all around 14-18cm , and we have 40 of those coming . Pictures below are the actual koi coming in . So then back to Niigata , first stop Kawakami . 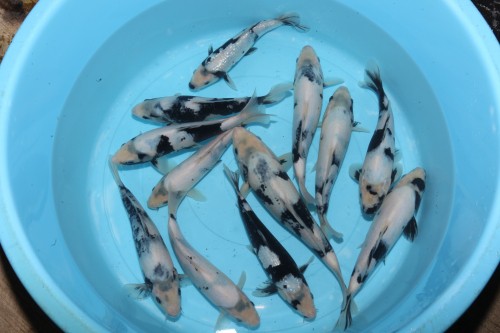 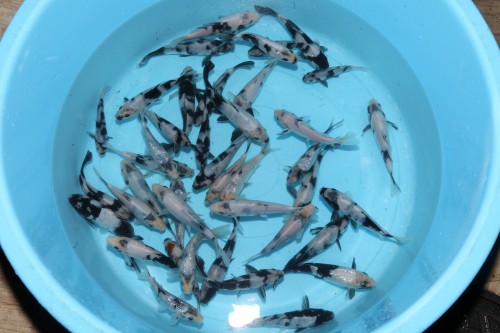 We are really struggling for goshiki , we have been to all my usual haunts , and none available , so today was my last hope , Kawakami koi farm . This farm now has goshiki to All Japan standards , but also has affordable ones as well . Looking in the ponds , he had some fantastic examples , but when the breeder arrived , he pointed to all the ponds we liked , and said , very sorry  all sold out ! So that left a pond of sansai , with a couple of goshiki that wernt really were not up to what i wanted , and a very large gin rin shiro utsuri , stunning skin quality and gin rin , but the pattern lacking up by the head . So i looked into the sea of black and white that was left in the only other pond for sale . A price was given , and i was a little taken a back , i really thought no way thats too expensive . Now that usually means one of three things , the breeder IS expensive , the breeders is too busy or doesnt like you lol ( it happens ) , or your not looking hard enough in the pond !!!!!! I was banking on the last option , as i like this breeder , and have always got on well here . It took some time , but i started to see a couple of koi that might be nice .So first up a vey nice hajiro , then another , then a doitsu one , then a kumonryu , then a nice shiro , and last but not least , a gin rin shiro with kado gin rin . I made up a box with great ease , and took videos and pictures . Then i was struggling , i had a few nice ones left , but couldnt find anything else i liked . The agent then suggested to have a look at the sansai gr shiro . Ok , go on then , glad we did , she was stunning , but as i said , not so much on the head . On closer examination , i could see a a faint patten which might be sumi , then as i followed it round , it went onto the gill plate , so sumi it is ! This made another box of very high grade unusual koi . So i purchased her along with the other nisai . Job done !

After here , we went to Maraska , the home of kujaku and sanke from jimbeo bloodlne . He always has a wide range of varities , and i soon started bowling up nisai and sansai . I ended up with a sansai doitsu hariwake , and nisai tancho sanke from Jimbei bloodline , a doitsu sanke , kinki utsuri and a kujaku . Nice quick stop to take us to lunch time .

So some of you might be thinking , why the title on todays blog ???? Simple , watch the video below and you will get it ! Ive been here before in the snow many times , but this week , ive seen almost blizzards , that have nearly stopped us in our tracks . But today visibility was under 50/60 yards , and it was a little scary to say the least . As luck would have it , we were nearly at the restaraunt  where we had decided to actually stop for lunch , which worked out well , as this weather wasnt even for Mad dogs and English men !

Over dinner , we discussed the idea of going over to Oofuchi , now the route isnt any more dangerous than any other , but its so isolated , the snow ploughs dont get over there so much , and with 10 cm falling in under half hour , we decided against it . So a new plan was hatched , visit Hoshikin and get my azuakri koi that we forgot to ship in the Autumn . As we drove over to the farm , the snow got worse and worse , and i was glad we wasnt far from the hotel . I was expecting a bit of a frosty reception , due to the fact we had left a koi at the farm for 4 months , it had got damaged harvesting , and it just slipped my mind . I  saw the breeder , and he came straight over  and shake me warmly by the hand . He had lots of tosai in the main fish house , and we were shown a few ponds , no picking , no picking , no picking .Last one , i said no  picking ?? Trying not to be sarcastic , he looked at me and said something i couldnt understand , i though thats a new Japanese swear word , the agent laughed and said  , of course you can pick , no problem at all ! The discussion then started around price and quantity , a breeder like this , will normally get a massive scoop net , and you select from that . He said if your happy with the price , a couple of boxes and we will net the whole pond . It was a good job i was full up on liver and rice , or i would really have bitten his arm off . What you have to understand this a very famous breeder , he is known for his quality koi , not his  generosity lol ! But bearing this in mind , and the quality of the koi , i turned to the agent and said , thats a very fair price , lets net it . Hoshikin is famous for his kohaku , but of late he has been breeding some very serious showa , but what i was shocked about  was the shiro utsuri , i asked if they were from the showa spawning  he said no , shiro parents . The sumi was soooo strong , but the shiroji seemed to have a blue hue to it , we asked him and he said he doesnt know , new koi ! Also some surprising non go sanke kijiro , doits fish like a hariwake , but smarter and more defined ! The wholepond was netted , and we set around selecting , i couldnt believe some of the quality among these fish , there really was some stunners . But although i said the price was fair  , 80 of them comes to a kings ransom , so i was getting really picky . we got to the end of the pond , looked behind me , and saw a bowl of stunning tosai ! I really couldnt be happier , i wanted to hi five the agent , but he said steady on  were not American , and even the Japanese had a chuckel ! So then back to the koi we needed to ship , for that was the reason we visited . Shipping was arranged , and it wasnt cheap for one koi , so i thought why he was in a good mood , lets try and get a koi in the box and save some money . We looked in his nisai , and bearing in mind , i have been to 90 percent of the breeders in Japan , i was shocked , especially in February ,the level was crazy high ! Im serious here , there comes a time when you see a pond and just think shit ! IM out of here , i apologise for the wording , but when you know koi, you know when its time to back off and accept it is what it is . SO i asked some prices , and they wernt so bad as i thought , and a kohaku was soon bowled , and i just had to have it , im a sucker for a maruten !

Being fairly happy at what has happened today ,we had an hour to spare . So  we returned to Marudo koi farm  , the nisai pond had cleared , i could actually see the koi  , so soon set about catching the koi up , and soon had five nisai that were all thought to be female . So a great way to end the day ! Sorry about the pics , we were rushing and the water was still rippling . I soon had all female go sanke , and a cracking kogani ochiba . Sixes 45-55cm approx . 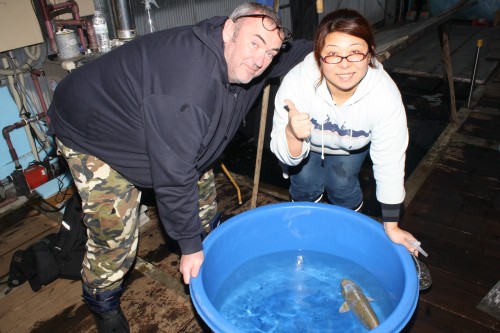