I think its fair to say , were not known for stocking a lot of tosai , but with us moving into supplying the trade more and more , its something we need to change . Our core business , has always been nisai , and jumbo tosai , with just of late us stocking 3, 4 and 5 year old koi as much as anyone else in the UK .

One reason is , to be competitive , you have to order from endless lists of standard koi , and i dont like not knowing what im getting , until it turns up in the box . Plus , if im honest , so many people are out there doing it anyway , i dont think the industry needs another wholesaler / koi dealer with a console list ! So today , i wanted to select , or try and plan  selecting tosai this week . Yesterday we selected some nice tosai go sanke from Marudo , and ran out of time /day light to go through the better pond . So this morning , first appointment was to go there and select from the better pond . On arrival , the pond was netted after the usual price discussion . This time is was more than just kohaku , the quality was clearly better , but some of the fish were much smaller , but someone told me as a young dealer , good koi will grow , not so good koi wont get better , so when selecting tosai , sometimes the size isnt always the first thing to consider . I soon had thirty nice koi in a bowl ready for videos and pics . This were done fairly quick , as it takes so much of the breeders time up , as i came to the end of this , Marudo came in carrying a bag of koi , and deposited in the pond we selected through the night before , he then repeated it again and again . I looked in the pond , and saw this was really nice , we might have to go back in . We asked if the price was the same , and tried to keep a straight face ( we knew it wasnt , when the stock was is fresh and new , the price goes up , as it dwindles the price comes down ) , he just laughed and shook his head , and i thought may double or treble what we had paid yesterday . Happily enough , it wasnt anywhere near that , and i thought it was a fair price , so the ponds was netted again , ad we went through it for another nice quality 30 tosai . While we were selecting , my friend from Belgium was in the next door koi house selecting nisai , he is a fairly big player in Europe , and we were told the price of the nisai , last night , and knowing my friend , he wasnt leaving me much in there , as to be fair , i did the same to him with the tosai  lol ! When we got in there , it was like world war three , bowls and nets everywhere , the water quality in the pond had gone , and i couldnt see i going well for us in there . But  Keko   ,  the breeders daughter , said no problem i catch and you choose . Works for me lol , she is a strong young lady , good at her job , and after seeing her tell Marudo off , i dont argue with her lol !  Keko gave me a net anyway , and pointed to the pond , we soon had things working well , and fish were caught , netted and selected . Now a lot of people , always wonder why , we dont ask the sex of the koi sometimes . Here was a good example , we were getting nisai up to 55cm at a price to sell under £600 ( not worked it out exactly yet ) , the breeder would soon put less effort into , if they thought we were only taking females , and next time the price would be dearer , when the fish are more money , then yes , i agree we need to be selecting females . All i ask before we start , are they all male ? No , some and some , was the reply . I was at a show when a dealer was selling a very nice six inch koi , he was asked if it was female , he said i dont know , but this is the male price , i did chuckle to myself as he gave e a wink as i waled past . So basically these are selling at a male price , if its a female , then happy days ! I soon had a round a dozen , sanke and kohaku , some were great value for money , others were incredible for the money , so pretty pleased with the whole morning .

Our next appointment was at Chorgoro koi farm . This breeder is another genuine nice guy , and apart from the best platinums in the world , he is now breeding some metalics , and growing on shiro utsuri . We popped in and checked what he had , he was sold out of everything except his platinums , so we had a look round and then a chat about the upcoming shows . Some may not know it , but Chogoro is also know for his other pastime , mountain walking , he thinks of nothing but trecking up and down the mountains in all kinds of weather . At his farm he has built an igloo , and i had to stop for a photo opportunity . 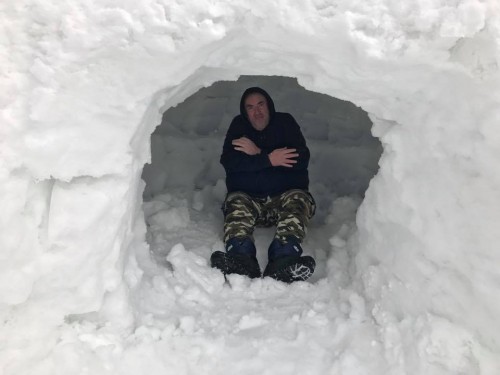 Whilst in the area , we had to pop into Yamazaki koi farm , another great guy  , who has many varieties , of all sizes and qualities .His nisai was well stocked up , and we took a box of nice varieties , gin shiro , asagi , doitsu karashigoi , kin ki utsuri and ochiba , all around 35cm approx . We moved into the toasi house , and had a good round ,i noticed that his doitsu Karashigoi were bigger this year , new brood stock ! So we had a chat about them , and he doesnt like hand selecting tosai , so he has agreed to send us a box of half karashigoi , and half doitsu karashigoi , and he will select the bigger and better ones . So we shook hands and moved on to our next appointment .

When your in Japan , the time seems to pass so quick , and today was nearly at an end , so we visited Kaneko . Famous breeder for shiro utsuri and kujaku , and i was looking for both , so knowing my luck i was buying everything else but ! We had a good look round , and i found some very nice quality nisai in his various ponds . But diddnt see enough to make shipping economical .This doesnt mean there wasnt nice koi there, we bought so much in the Autumn , i can afford to be picky . A solution was offered when we visited his back pond , usually too expensive in the Autumn , he prices today were more than fair , and i soon had two matsukawabaki in the bowl , both sansai and female , one around 45-50cm , and the other 50-55cm , both very nice quality . I then added the koi from the more expensive ponds , and we soon had a great bowl of koi , an aigoromo , goshiki and two more matsukawabaki , the latter two female , goshiki and aigoromo he couldnt sex . When buying better quality koi , the breeder has no problem trying to sex them , but even they struggle in the winter at nisai level  . I was very happy with these koi , so then a discussion on price took place , it was added up , and then i heard my name mentioned and a price was offered by the breeder , again not cheap , but very fair ! Then we discussed tosai selection , and we have agreed to go back and select a box of Kujaku , and matsukawabaki and gin rin ones . The light was fading fast , and the snow getting worse , having had a good day , we decided to call it a day , and headed back to the hotel . As soon as i get in , its video upload , and pictures sorted ready for the blog . I just couldnt concentrate , and kept falling asleep into my pc , so laid down and had a much needed hours sleep , hence thats why the blog is a little later tonight . See you all tomorrow ...... 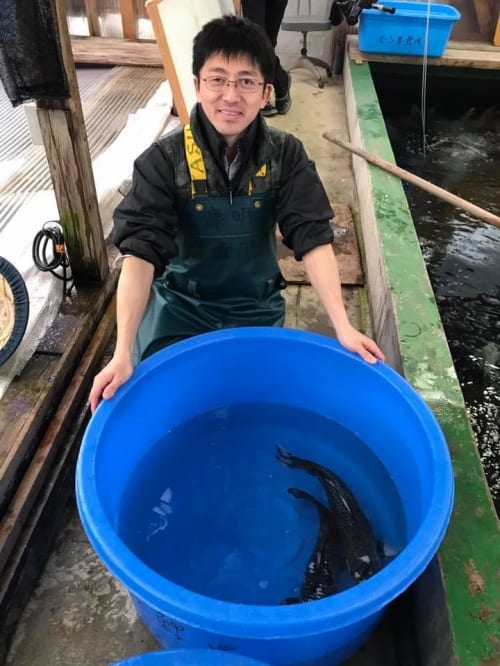