Today is my last day in Niigata , and we move operations to the south of Japan ,to see if this can expand my business any further . As a few of you know , its a bad time of year for me , as 7 years ago , i stepped off the plane at Heathrow , to the news my dad had died undgoing an operation . Its also my Mums birthday this week , and she sadly passed early on in the year , and i know my family in the uk are getting together for the day , and here i am half way around the world away from them ! So i left the hotel , knowing that my mind really wasnt on the job in hand , to the point where our 9am appt at Koda i was going to cancel , as i just wanted to do a few things i had to do to finish up , and get back to Tokyo . But knowing that cancelling appts is not the done thing , and i always try to operate in a way that doesnt upset anyone , i went anyway . To be honest , im very glad i did , the son hs now taken over the business , and is such a nice guy you just can help but like him , the fact that he had three ponds full of nisai with hariwake and goshiki , was irelevent lol . The ponds were looked over , and a fifty fish deal was done . The varieties were amazing , goshiki , doitsu , go snake , shiro , gin rin shiro , gin rin go snake , ochiba and loads more .i also found a doitsu kohaku , very high qualiyy for a uk customer  I soon had my bowls filled , and set about my pics and videos . About this time , a lot of people came in the fish house , which is very frustrating , three times i had to reset videos , and on the 4th time i snapped . I said to the guys , this is not professional , they all apologised , and let me get on with it , a few of them i knew from meeting them over the years , and they all spoke to me and said sorry again . IF you ever find yourself in Japan , visiting breeders , remember , you are a guest in their place of work . How would you feel if you were trying to work in your office and  a big group of people came in and made a racket . To make it worse , there agent came in and he is a very good friend of mine , and he told the guys off ! Big respect to him , he gave me a cuddle and we laughed and made some jokes , really nice  guy , and a 100 percent professional ! So knowing this guy is a bit of a player , i knew there were two doitsu shiros , sansai around 55cm in a pond . I also know this guy buys whole ponds to get his price , so i bowled them up , he saw them and laughed , of course Gary , doitsu shiros , where else will you see them ? Koda gave me a great price as we did so much business with him , i couldnt  refuse . I said good bye to my friend and headed off to Yagenji to have a look at what he had there . 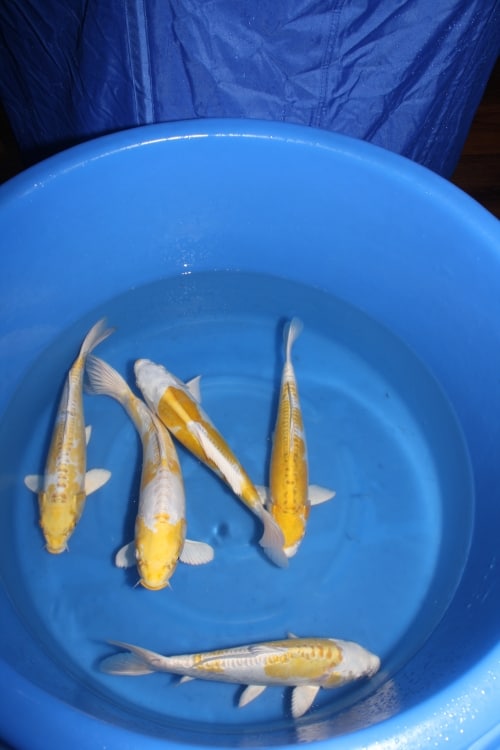 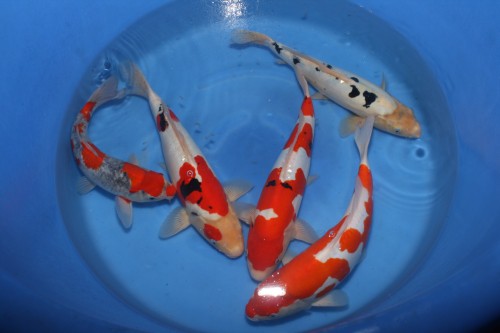 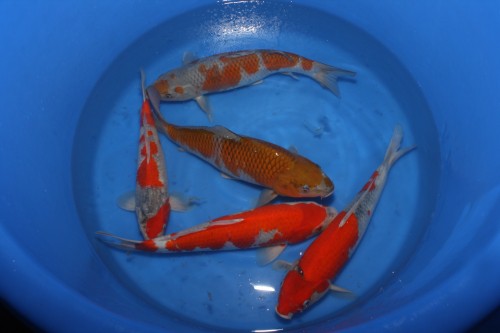 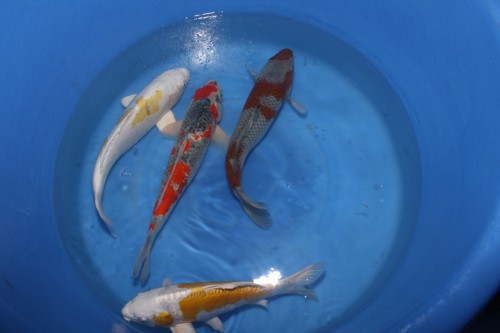 Very nice quality doitsu kohaku , selected on behalf of one of our regular customers , will be going

on the wbiet once they have decided .

Sansai doitsu shiro utsuri , around 55cm , sorry about the pic , had to use i phone as she was badly 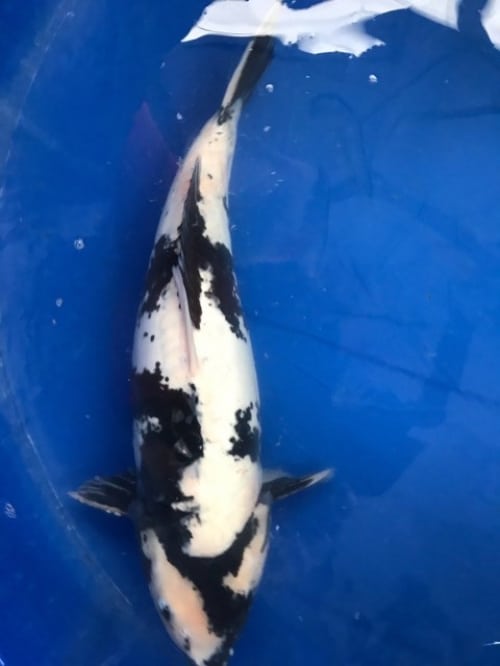 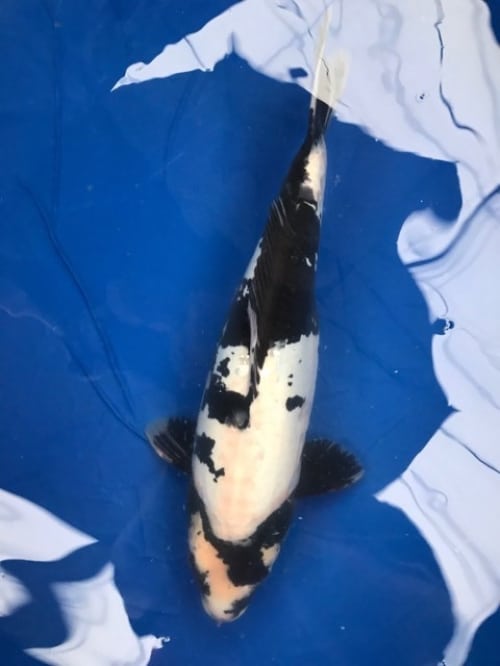 We were joined by a lady from Austria , and a guy who works for her , its not often i have people in the car with me , but she was a pleasure to work with , and she soon had a few boxes made up . I saw nothing that i diddnt have already , as we had bought a lot from Yaganji , so we then went onto Chogoro . Last night i added the platinum ogons to the website , and couldnt believe the response , i also offered some out trade , then relised , i had sold 8 more than i had purchased , so went back to select again  , along with my new Austrian college who also picked some nice ogons , i was one short from making up three boxes , returned to select one more , and the same thing happened as yesterday , i saw another unique kikokoryu in an expensive pond , so put the it the box , and a quick haggle , and all was good ! 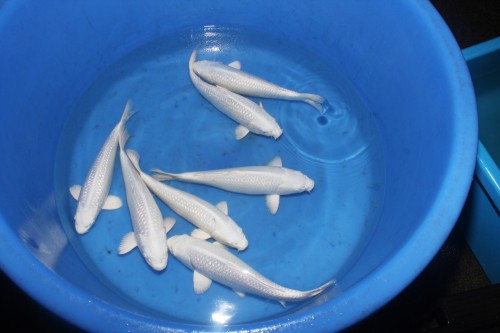 Another box of platinum ogons 35-40cm 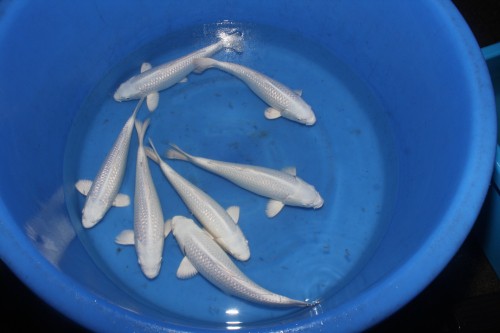 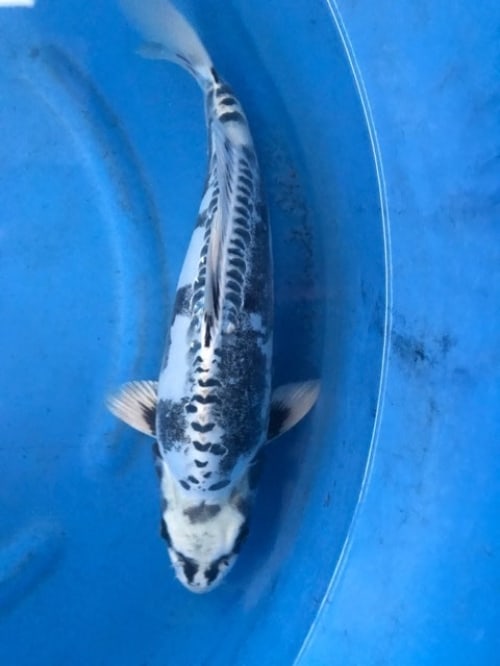 Then it was off to Hirasawa for ogons and chagois , and im shocked to say , i bought nothing , he showed as a stunning ogon , fukrin like you couldnt believe , but way above the price of selling to the uk market , 5 jumbo chags and karashigoi were bowled , but all had shimmies or very slight scale damage .So on this occassion we had to pass .

Yesterday , we were struggling for kohaku of 50cm plus  nisai . After a quick chat with Maruhiro , he asked us to return to the farm and select from him and he would do us a deal , so he selected 15 nisai , so we could return to day and inspect them in day light . On returning today , we bowled up the koi he had held in a net over night , and selected 7 from them , all 50-55cm , nisai and female . Two others were returned as male , and more followed as i diddnt like them . Hinori came back and was shocked that i had decimated his selection by half . But i could see he was happy , as he was selling to customers from the circle pond , so i asked him what to do , he gave me a net and pointed to the pond , i diddnt need a second invitation . Knowing i needed three more koi , to reach the ten large nisai deal we had shocked hands on , i soon had many more and two large ki goi and mukashi ogons around 70cm in the bowl . My agent looked over , and said are you ready , i nodded , and he laughed him self silly when he saw what i had in the bowl . He called over Hinori , who also laughed himself silly as well , untill i made an increased offer , and he scowled a little and made a counter offer , and went back to the circle pond . I came up with an idea , i took one female i wasnt so keen on , a kuajku i knew was so good it was holding the price up , and returned them to the pond . The agent then said , its still to much to ask , Hinori came back , saw the female kohaku and the kujaku where gone , he gave me a knowing smile , and nodded , and i knew i had my price . The ten female kohaku deal , had turned into 7 females kohakaus , one male ( very serious quality ) , one maruten showa also male but again stunning , a female kogani ochiba which is female and the best i have ever bought , and a 70cm ki goi and mukashi ogon . Great way to end the day , and no one better to end with ! I was then dropped of at Ojiya staion , where i took a local train to connect with the bullet train , and then staey in Tokyo for one night . Sitting at Ojiya station was strange , pour down with rain and wind starting to pick up ,a cyclone was suppoed to be coming , but down graded to a typhoons lol , its was kind of eerie , but gave me a alittle time for reflection on the week , and in fact the whole year , its has had its ups and downs , and this trip was definitly an up !!!!! Tomorrow , sees a new adventure for me , i take another long train to Hiroshima , where i will be looking at breeders down there such as SFF , Momotaro and many others .I hope you have enjoyed the blog , but its not over yet , keep reading .......................................

70 cm approx ki goi , female and the black mark on the left hand face is rubbish in the bowl , and not in the koi. 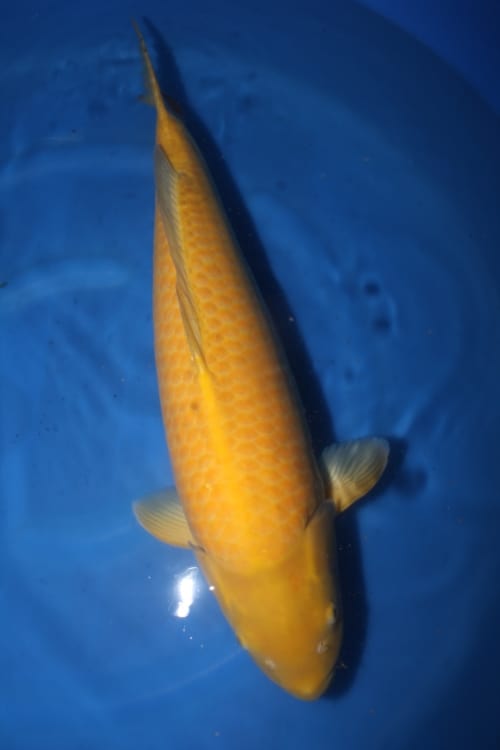 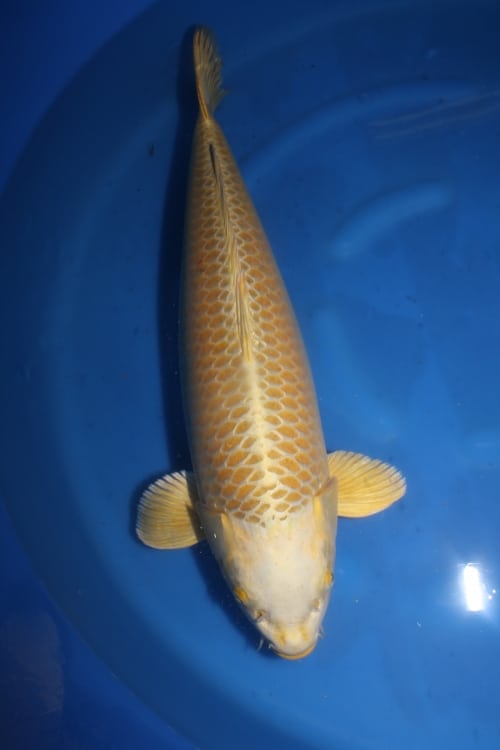 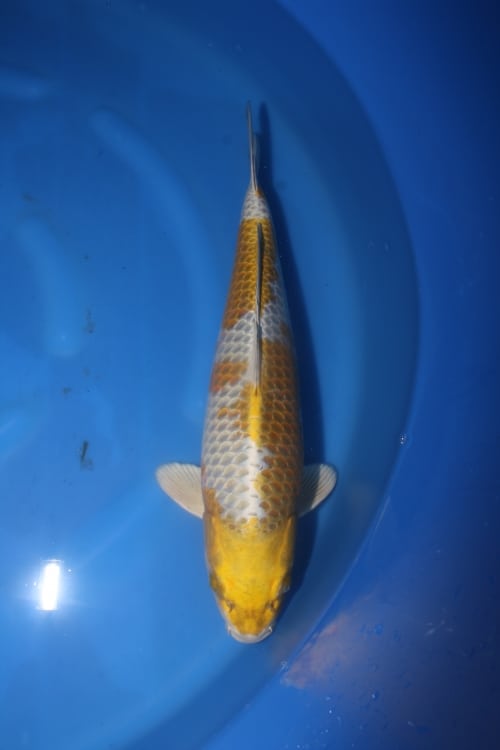 Nice maruten patten , female and around 5955 55cm .Please note , these had been just harvested , and then left

in a holding net over night, then in a bowl for an hour , so they are a little stressed ! 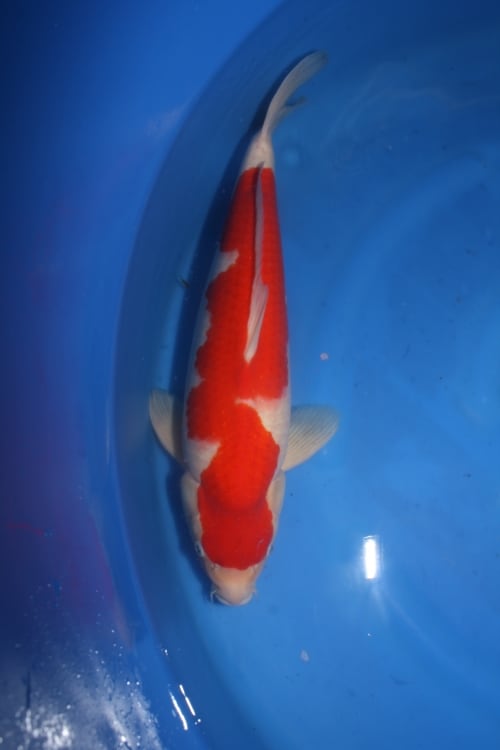 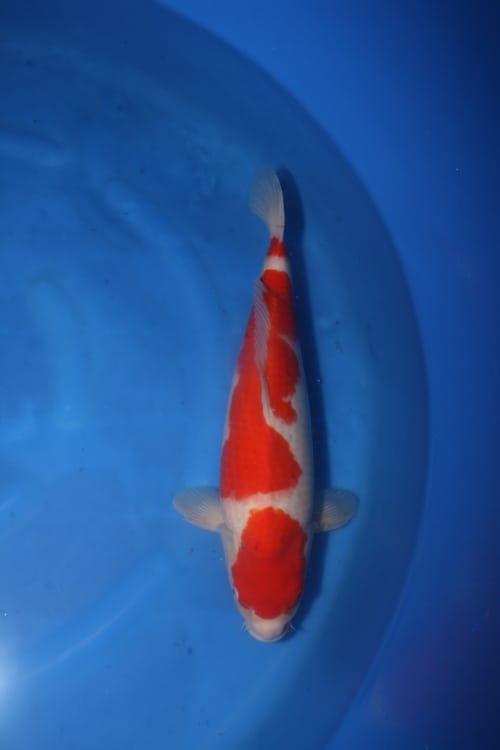 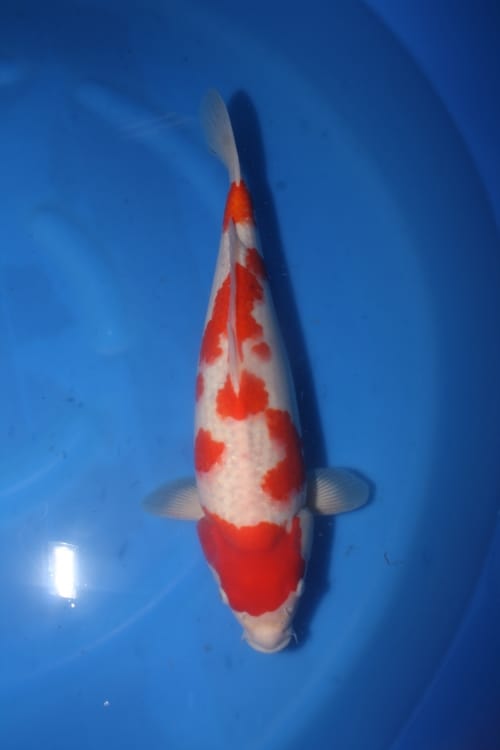 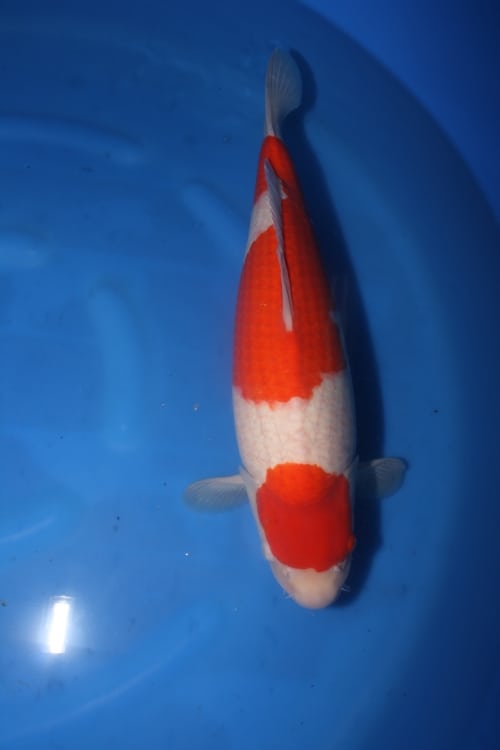 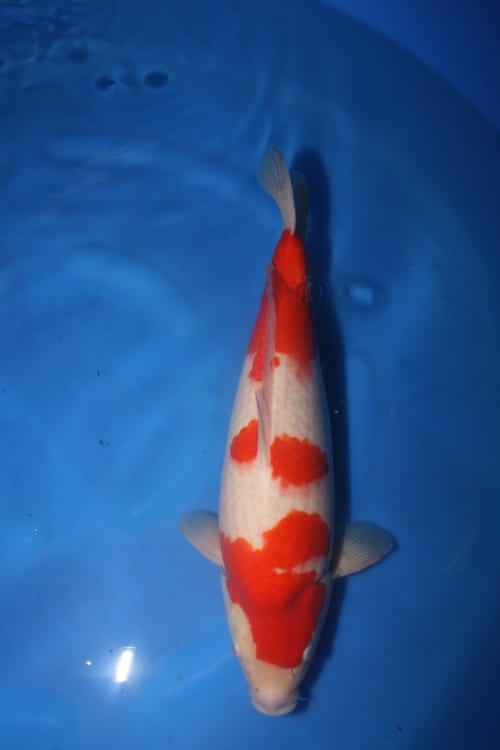 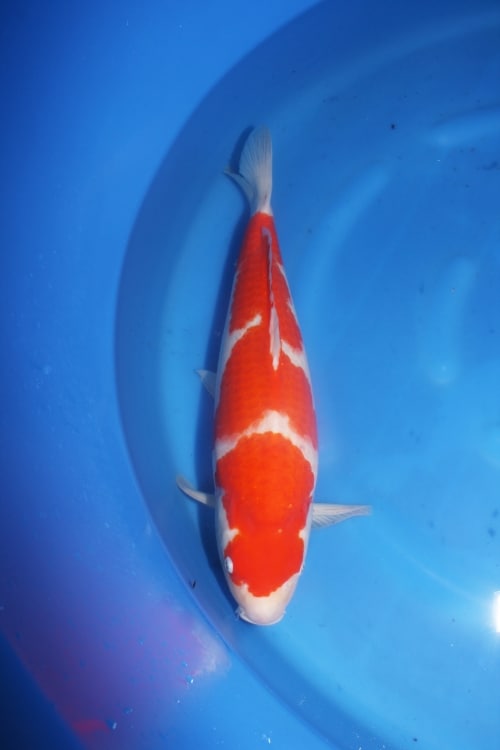 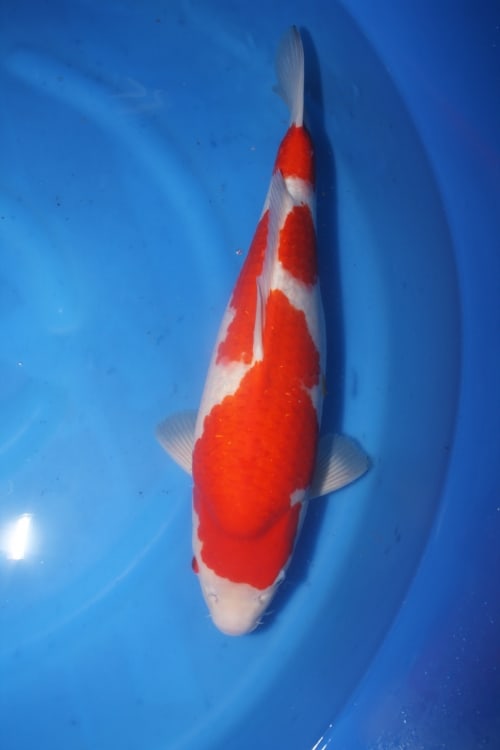 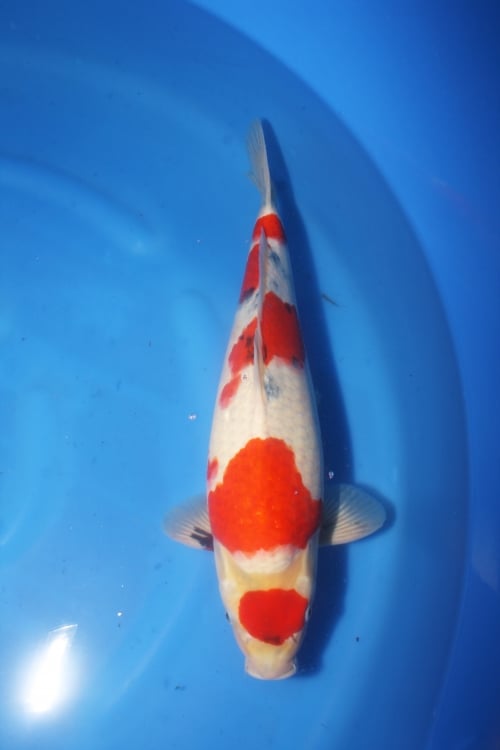