This morning , we were to have a late start , as its Sunday . So i walked down stairs for breakfast , saw the hotel owner , nailed my Japanese greetings , and asked him how he was , and he shook me warmly by the hand . A real nice guy , and runs a great hotel. I went in for  breakfast , which i know some  of you are worried about in Japan , no need , theres always something for everyone  Today was poached egg , meatballs , salad , fruit and bean shoots . Also tried something new ( which i try to do every time i am here ) , it was vegetable mixed in with tuna and had a bit of kick to it ! Half way through the meal , the hotel owner entered and presented me with a bag of Japanese cakes , perhaps my Japanese wasnt , is not so hard on his ears nowadays lol ! When i got back to my room , i had an email , from the South of Japan , with some very nice offers , which i am now mulling over as i write this . The first offer i couldnt refuse ,were some nisai Ueno showa , all female , with certificates and 50-55cm . I agreed to take three , and these are below . With time already marching on , i think ill be taking more of these offers from the South , as i dont think i will have time to go down there at the end of the week . 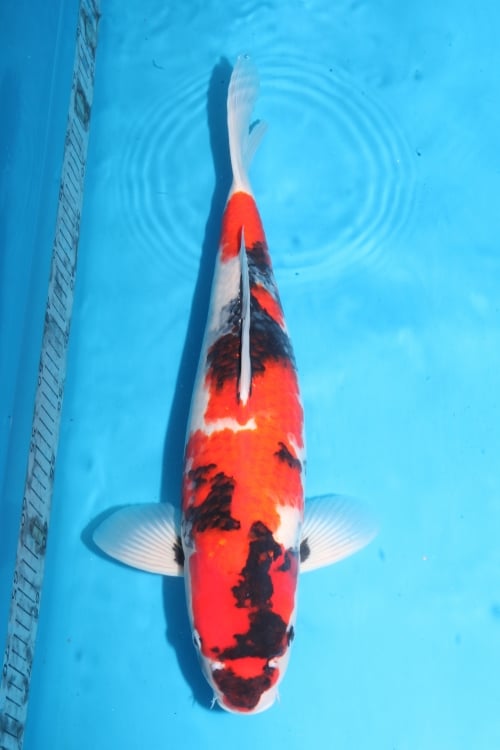 strong sumi in the pecks . Interesting to see how this develops . 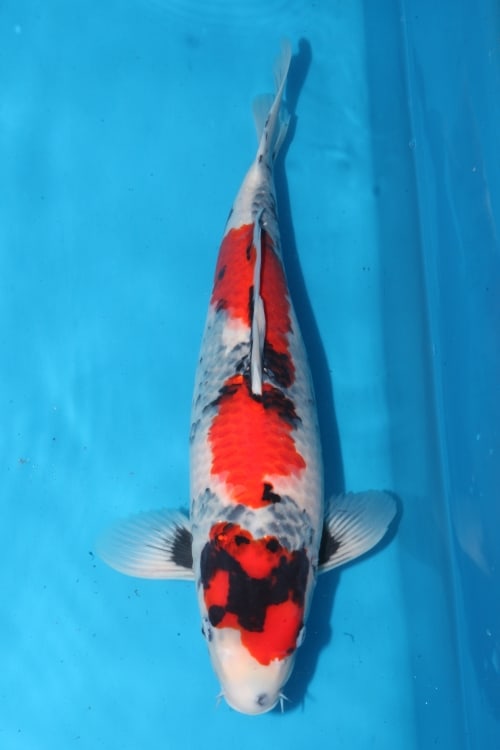 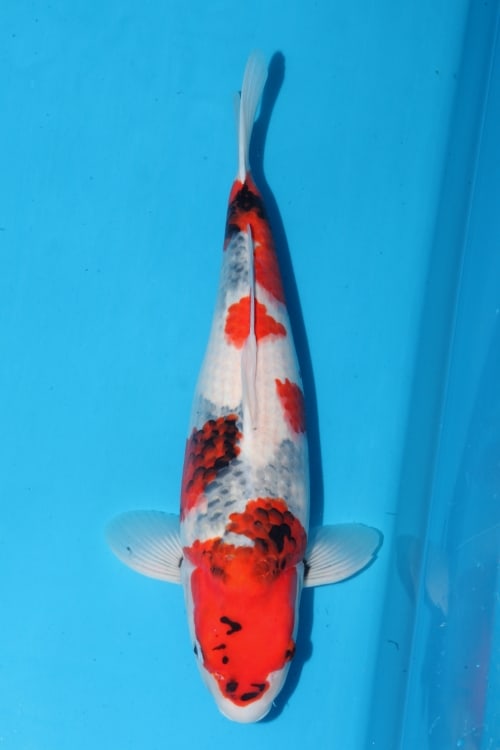 So with rice cakes , three nice showa , im raring to go , time to visit the mighty  Marusei koi farm ! We arrived at the farm , to find Yoshiuke on the digger , clearing snow from the farm . He came in , and we did the usual coffee , and chat . After this we looked round at the facility and koi . Ive said it before , but its hard to comprehend how big this farm really is . Not only this facility , the one next door , and at least three others i have visited , one i havnt , and i suspect a few more on top of that ! After a good look round , i found that the buy of the day  were his kujaku and hi utsuri . A price was agreed , and after a while , i soon had a large bowl over flowing with nisai . Final selections made , i had 20 kujaku , matsuba ogons and hi usturi . Usual rubbish pictures were taken , and videos as well , and we were done . After a good look round , i really couldnt see much more i wanted to bowl , except some chagoi. They looked a good size , and the price was right , but most had a little mark here and there , not the breeders fault id imagine , just think of people in there catching and bowling these 70-80cm monsters , these were just a few left from 2 months of selections . So i started to look in the three higher quality ponds , but really couldnt see the koi for the koi, i mean there were hundreds , and every time i saw a koi i liked , blinked and it was gone again . Plus if i was honest , i was tired , and i think the effort of catching koi in these ponds were just too much for me . Then Yoshiuke asked if i had seen the Bekko our agent had reserved a week earlier . I said no not yet , it was bowled ,  sansai and 63cm , she was very nice . Bekkos are not a variety , that really grabs me , but this one did . Plenty of sumi in all the right places , sumi that was coming through looked very high quality , skin was excellent , and she had a very white head . Some of the scales has an almost gin rin like edging , she was really growing on me . This trip i had decided to buy more different and unique koi , and we all agreed that she has show potential , so a price was agreed , and she was now the property of Gatwick Koi .

As usual , lunch consisted of an almost traditional visit to the 7-11 , BUT , no egg sandwich !!!!!!!!!  Now before you panic , and ask if i have an allergy , no , i just am in the mood for being different . So i took a fish thing (sometimes its better not to ask ) and a boiled egg . We were then struggling for places to visit . Most breeders were at the show still , and those who wernt , were very busy already . Eventually we got hold of Shintaro , who said we could come up to his farm now . We had a look at his tosai , and he made a very nice offer of some around 20-30cm , some a little bigger , but i passed , as i prefer to buy his koi bigger , around 30-40cm later in the year . Plus , the main reason for this visit , was to look at his nisai sanke . On going into his nisai house , i was surprised to see how many koi he still had left ,  thats always a good sign , or so i thought , i enquired about many koi , most were sold , and those that wernt , were male . Even asked about a few very high quality sansai , which were also sold . So i found two showa , he said yes , they are for sale , and then gave me the price , they were a little above of what i was looking for , and really did need some sanke . His sanke are based on the Matsunoske bloodline , and i really like them , but today wasnt going to be my day . So we thanked him for his time , and left for an early day , back to the hotel . Tomorrow , we have appointments booked already , so we should see a little more action .