First job today was to visit Isa and see how our two Azukari showa had come out of the mud ponds . Good news they were out alive and well , that was a good start ,  , also both female . Both had grown and were around 50-52cm . One was very nice and pleased with that , the other had some secondary hi around the tail which spoilt it , real shame as the skin was lovely and the pattern nice . Here in lies the risk with Azukari  , I NOW have two nisai showa , both now worth much less than I had paid as tosai . Am I worried , no , that's the way it goes , will it stop me doing it again , definitely not ! Would I carry on buying from this breeder , hell yes ! You have to take this on the chin , the good goes hand in hand with the bad , and that's the way it is , if you cant take disappointment , don't leave fish in Japan . Please don't take this as negative , I enjoy leaving koi in Japan , but im aware of the risks , the pitfalls and also the excitement when they go right ! We had a look round and they guys are still busy harvesting so the wasn't a great deal of koi to view .We left here and wanted to go to Yagenji as we had a Kindai showa coming out of the mudponds there as well.

Isai nisai showas , both female and around 50-52cm. 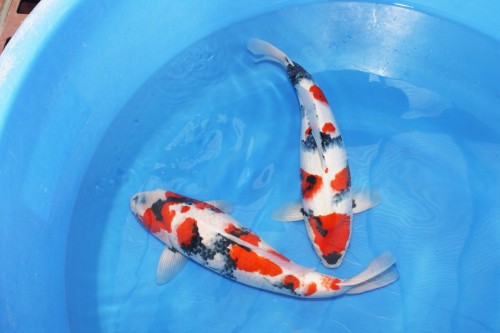 Yagenji wasn't available for a few hours , so we visited Kawakami , always good for unusual koi , and also goshiki and shiro utsuri . Once again he had just started harvesting so there wasn't a lot to see . One pond had sone very nice goshiki , most looked female , but wasn't really what I was looking for . We then visited Torazo and had a look at his nisai , very nice , but again I had already bought some at Marudo . By now it was time to go and see our showa at Yagenji . Ive been pretty honest about the bad side of leaving koi in Japan , now we got to see the good side , I had herd rumours that she was out and alive and looking great . She was bowled and I could see the body had filled out nicely and  she had grown to 71cm . She was a little lively in the bowl , so I took the pic I could and got her back in the pond as she is now sold ! The customer is very happy and so was Yagenji  and myself ! Purchased as yonsai at 62cm , now go sai and 71cm , very pleased ................... 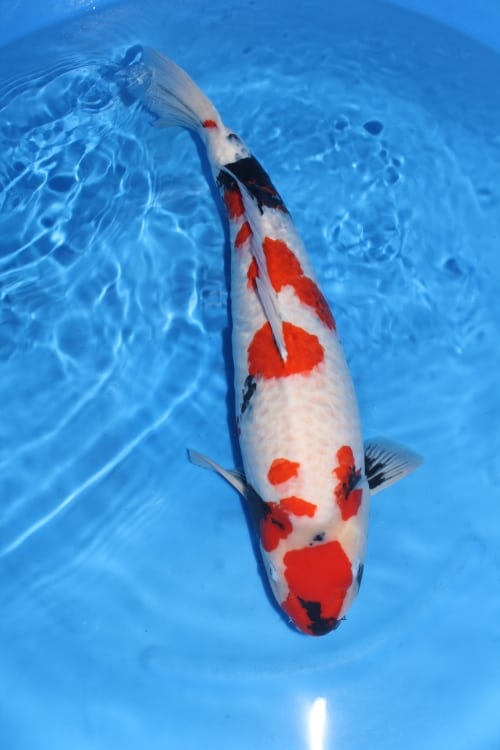 When you have a great koi like the kindai showa come out , the rest of the day can seem like an anti climax . So we had a drive round , and it was decided that the only person who could give us high after the azuakri koi coming out , was Hinori at Maruhiro Koi farm . There was a few people at the farm when we arrived , so we we didn't stop for the coffee and rice cakes . Instead I thought lets pick some more nisai as he seem to be the best around and still very good value even with the bad exchange rate . I picked the net up and Hinori shook his head so I placed it down again  , ive learnt not to argue , the people there finished so I picked the net up again , once again he shook his head , I gave him a bit of a puzzled glare , he passed me and said quietly atarshi ikeage ( sorry if its spelt wrong ) it means new harvest . The other party left and a k truck appeared with some massive shusui , bodys like ive never seem on nisai around 40-45cm , lots of other varieties as well , and I was in there first pick . I selected a couple of shusui as some people have asked for them , but also of interest was his new doitsu gin rin chagoi , sorogoi and ochiba . Basically doitsu ki where the only few scales have gin rin on them , very quirky , so I selected a few of them and some other varieties as well.

We were then asked to join him for coffee , lots of discussion started about koi and things in general , Hinori asked if I was looking for anything in particular , I just shrugged and said I know when I see it and laughed , he asked beter quality ??? I said of course , he said can you wait 30 mins , his staff had just harvested ANOTHER pond , anmd were on their way back , I could select through them first , I said I think I can manage that ! The truck soon arrived and once again were selecting some nice koi , amoung them were dotsu hi utsuri , doitsu showa , kujaku , and some nice go sanke and one very nice showa , probably male , but very good for koi shows 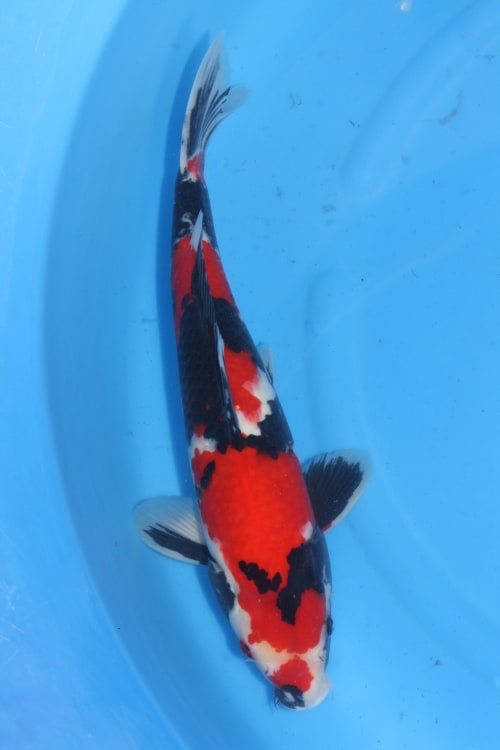 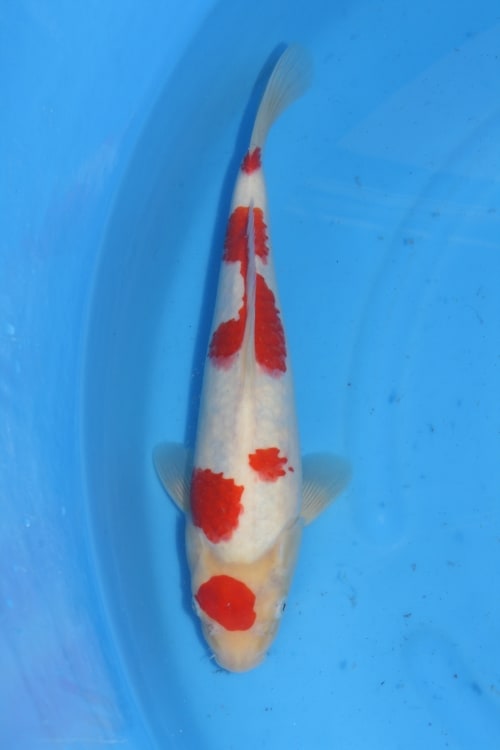 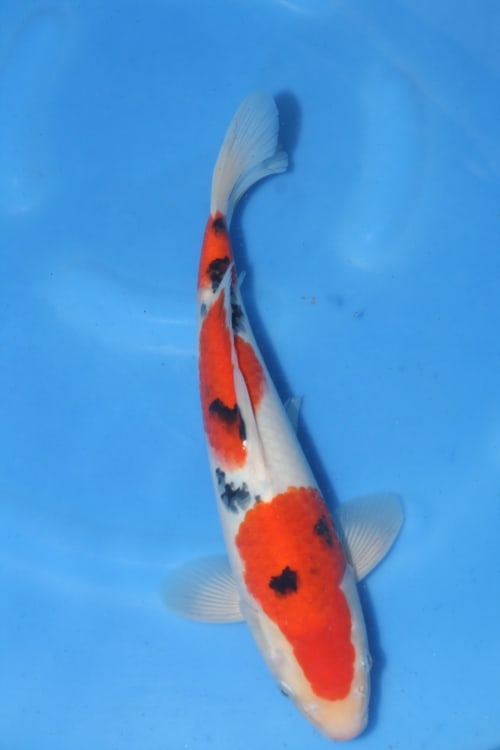 After we had finished the pictures and videos , I noticed all the staff all still hanging around the truck , having  a rather nosey mature I peered into what was meant to be an empty zippy container , it wasn't empty , tategoi he said , going back to the other facility ready for next year . A little discussion took place , and two were placed in a bowl , the skin on was once out of this world , but everyone else liked the other , a further discussion took place and it looked like I had two more sanke to leave in Japan next summer, it was the right thing to do , if I knew what I now know about what was going to happen tomorrow ,  I wouldn't have hesitated even less , but that story will have to wait for the next days blog lol ! 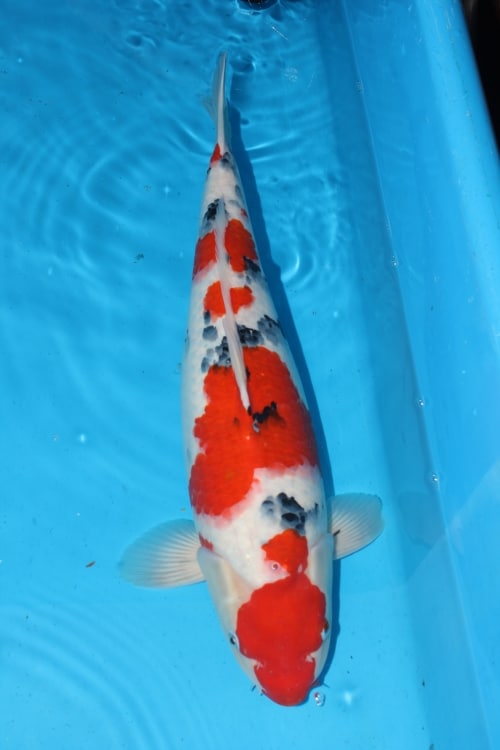 Another 53cm snake , once again tategoi and staying in Japan for one year 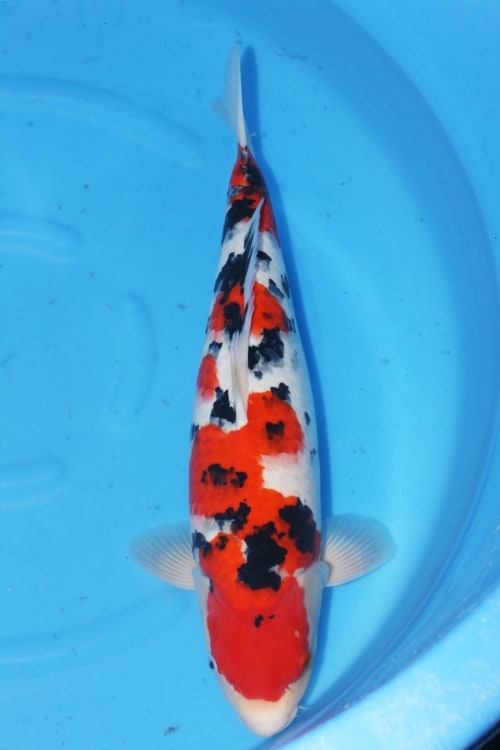