Its a hell of a long journey  , from door to breeder around 23 hours or so , to add to that an hour delay on take off , this one seemed longer than ever . So its not surprising that after that , and 6 hours with the breeders , that when I got back from the meal , I just gave into my body and went to bed at 8.10 pm .Im always the one to say stay up late to beat the jet leg , now I don't , just sleep when you can , blog and facebook can wait . So its now 11pm and im raring to go ! So back to the beginning , and where is that you ask , where do you think ? Maruhiro Koi farm ! Theres nothing I can say about this place that you haven't read before , the youngest son of the Hirasawa empire ( and I think that is valid description !!!!!! ) , his fish are great and get better every year , on arrival there where some people there just finishing , so after they left I thought lets get in , lots of very nice koi in here that need bowling .But as ususal Hinori was having none of it , coffee first and chat , its almost religious like!

Coffee seemed longer than ever and I asked if we could go and look and some fish , just a minute he replied , a minute turned into another etc etc , a truck pulled up with his guys fresh from the harvest , now we can go he said , so choosing koi straight off the back off the truck , I love it ! After a little while selecting of selecting though the new nisai , and what I thought were a few good ones that others had missed , I soon had a dozen or so very nice nisai . The beauty of his nisai are that they very from 35cm right through to the high 50 s , so usually a price bracket to fit every pocket . Obviously I have grave concerns about the yen rate , but Maruhiro helped us with the prices and I thought we got treated very fairly as usual , bearing in mind that fish and freight are charged in Japanese yen , both are working out around 30-40 percent dearer , so we have to try where we can . Anyway back to the fish , go sanke  and a hi utsuri . Once again I was pleased with the choices . 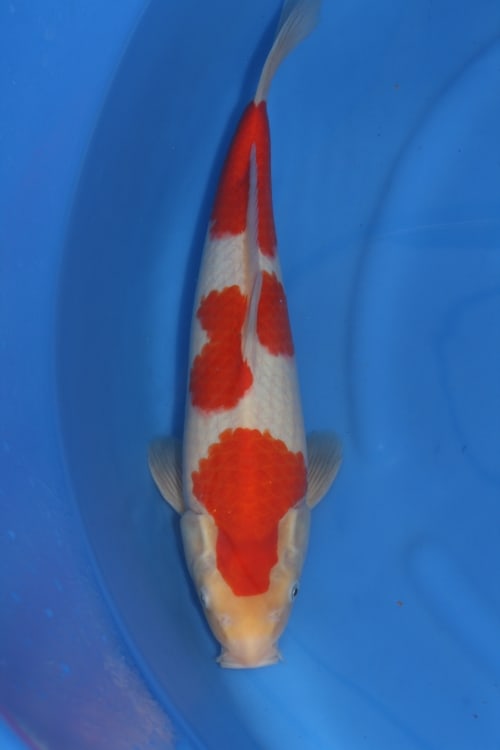 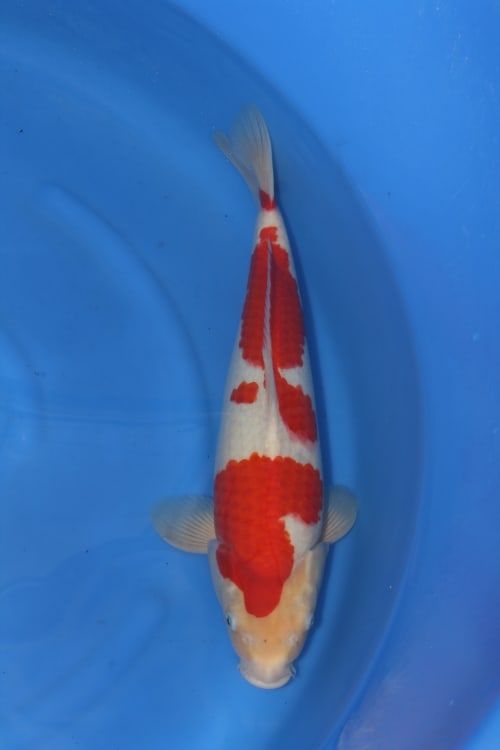 Hi Utsuri and showa around 40cm 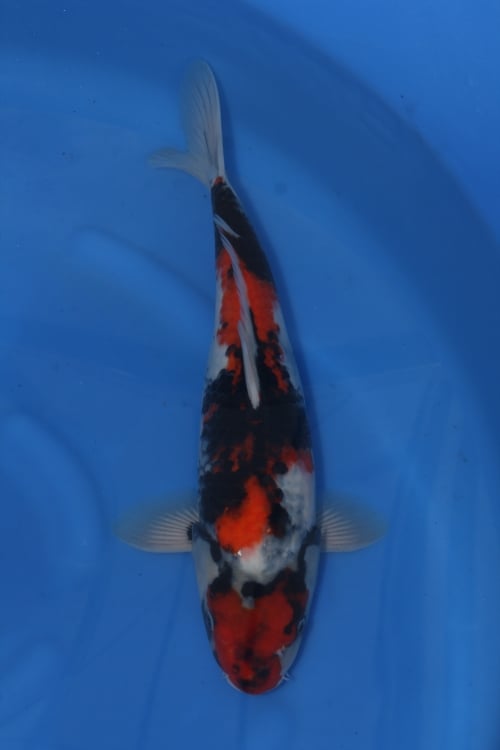 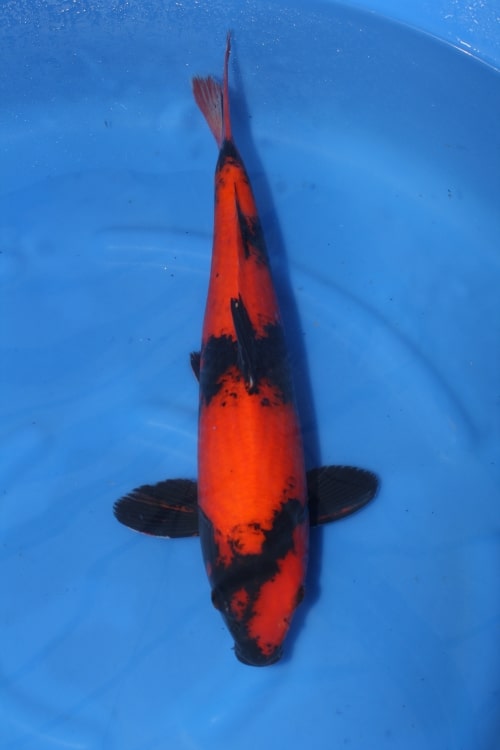 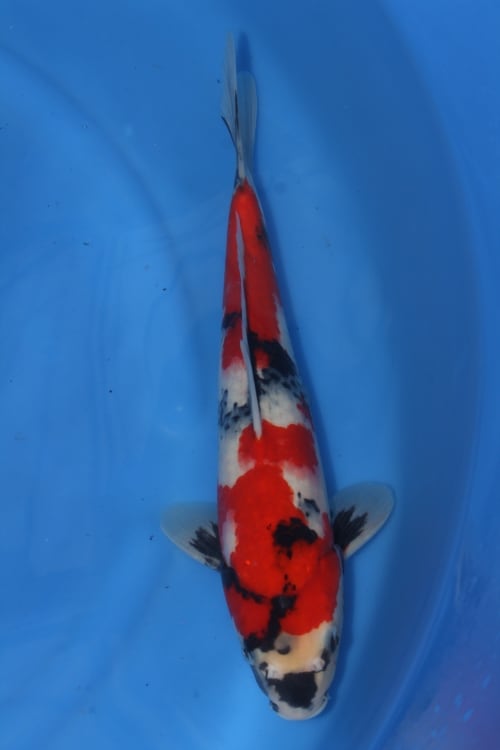 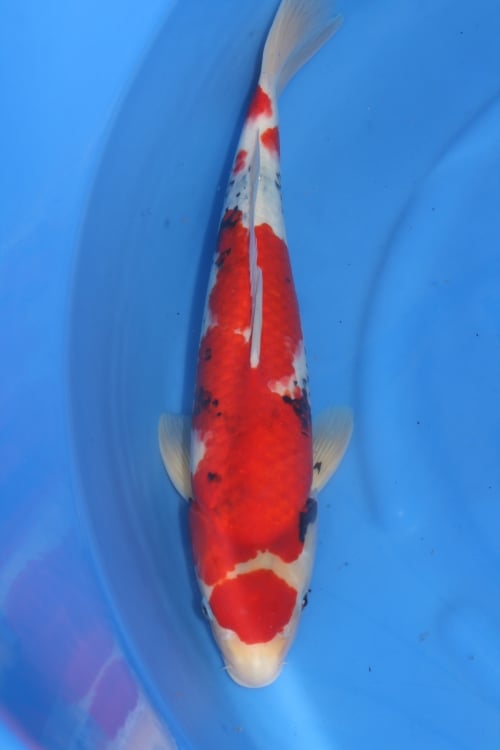 A nice maruten sanke and a very unusual goshiki showa 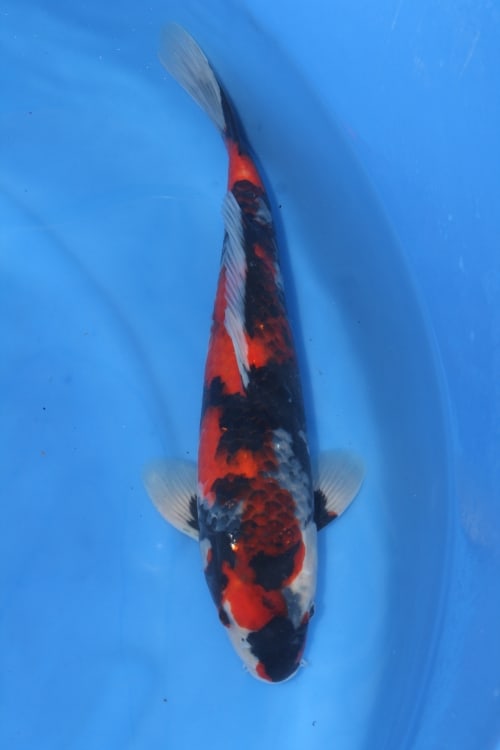 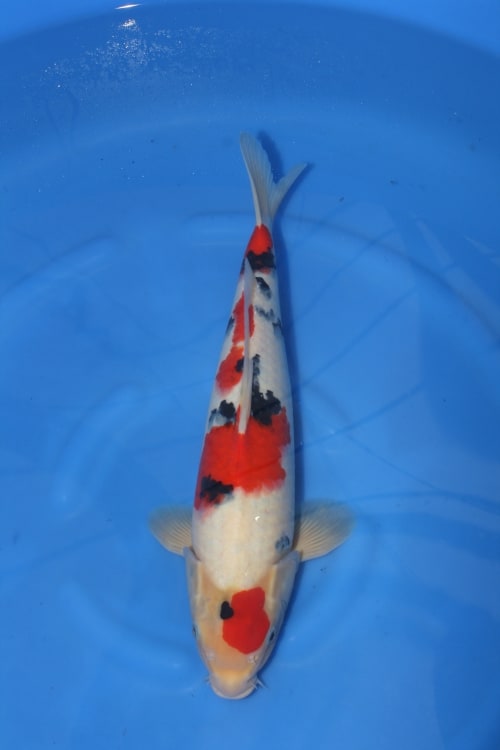 After videos and pics were done , we moved onto the bigger ponds and some even higher quality koi .Again go sanke , and Hinori San tried to do his best to sex the fish , first three he believed to be female , last two he wasn't sure bit though male . 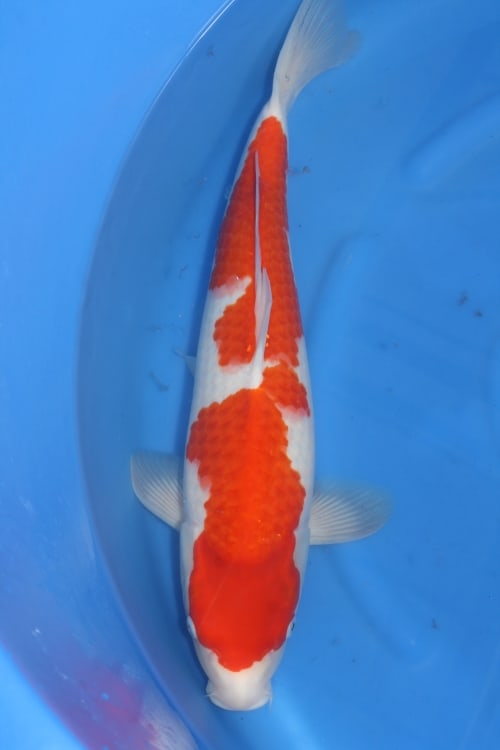 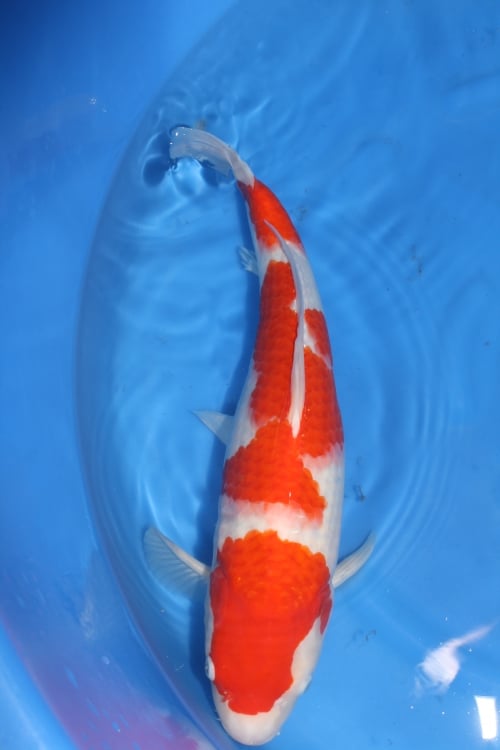 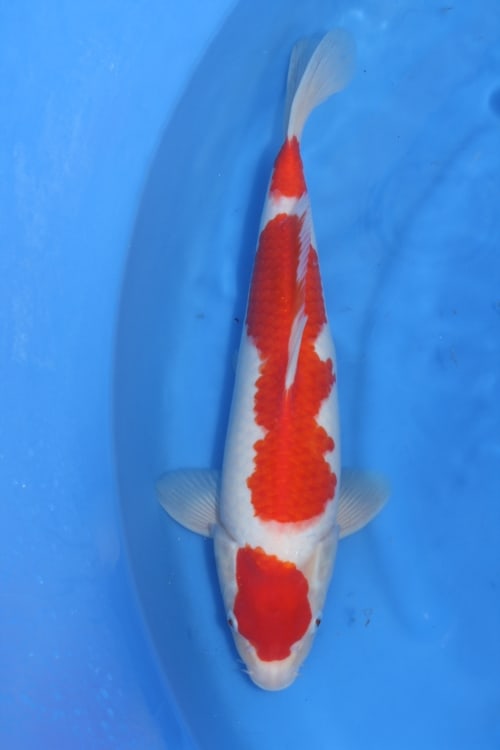 Two nisai that were thought to ne male , but still very nice ! 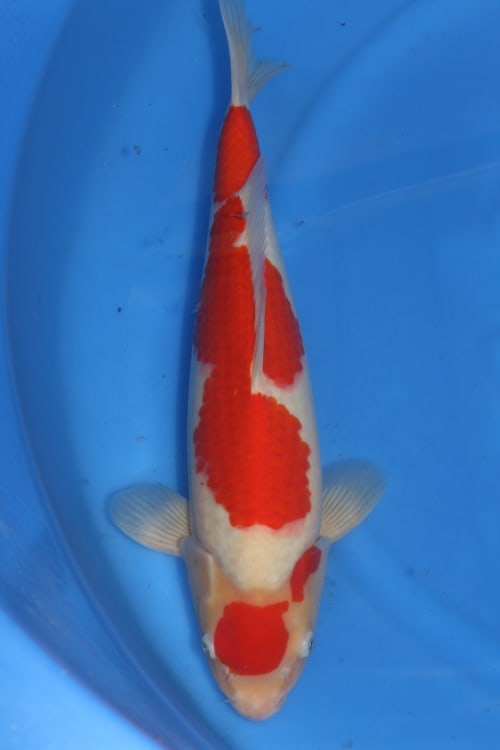 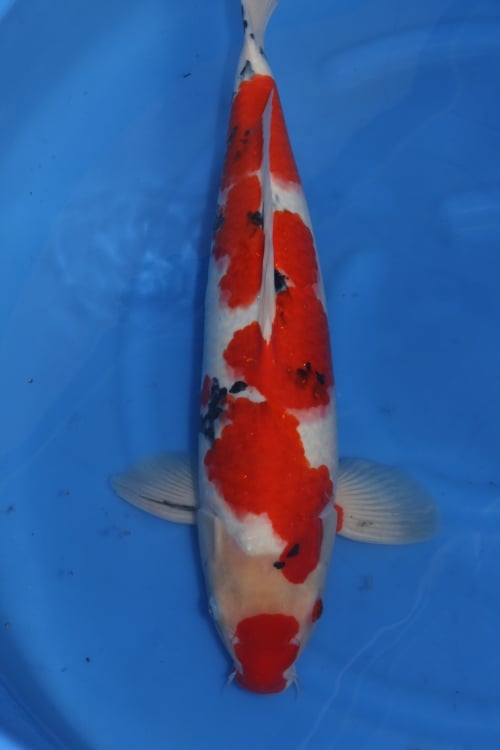 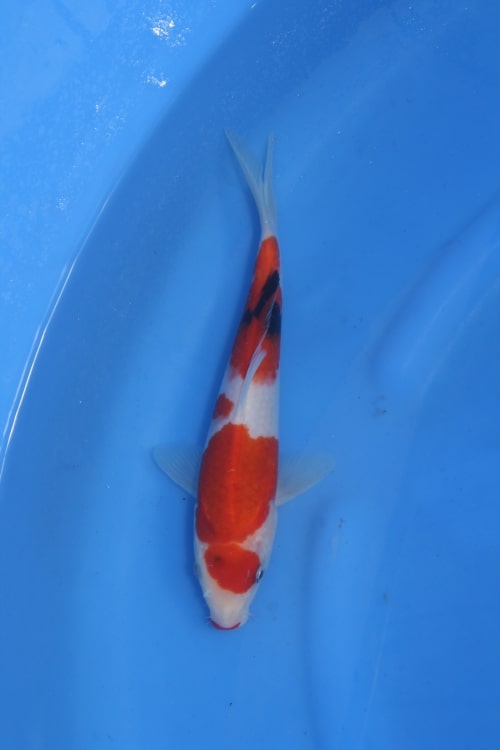 Many more koi were bowled , with the idea of finding something to leave out in Japan this summer . Hinori bowled this maruten  sanke , female , nisai and 53cm , ticked all the boxes for me , so was duly purchased . 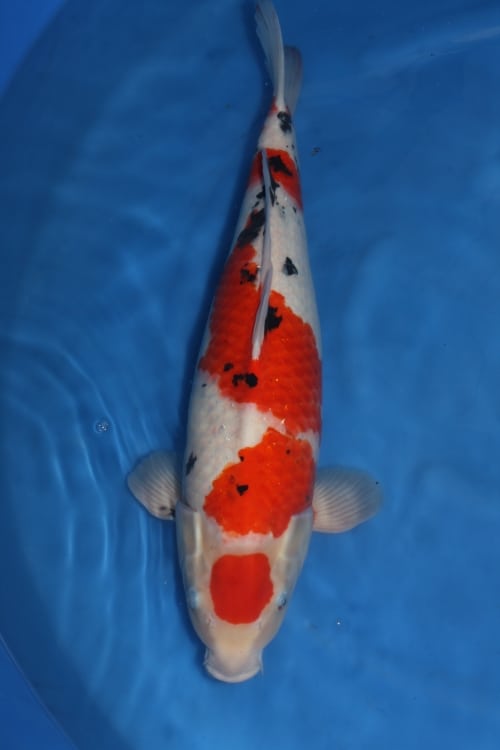 One  more last koi before we left the farm , saw this swimming around , show quality sanke around 40cm , very nice skin , and a good body for a male ! Hinori thinks this will grow well ! 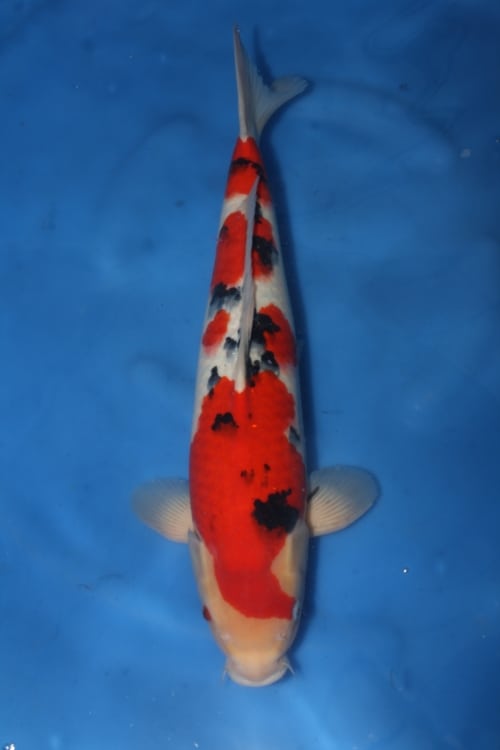 Our next stop was Yagenji , I have bought a lot of koi from these guys before I left on the trip to come here , the reason for doing this is simple , this farm is very popular , and they sell out quick ! Looks like it was the right decision as well , when I arrived there was lots of shiro utsuri , but not many that were up to the standard we like from these guys , lucky I have purchased around a dozen already which ill add on here .  Looking from pond to pond , it was clear that the stocking levels wernt very high , and to be honest I thought id struggle a little , but after a cup of coffee we had a bowl by each pond , and managed to make a nice box of nisai and sansai . First one in the bowl was a very heavy patterned shiro utsuri , sansai , female and around 55cm , then a very nice asagi which the brothers couldn't sex , also sansai around 50-55cm , a nisai shiro , female , around 40-45cm and very nice quality and a gin rin kindai showa unsexed .

Sansai shiro utsuri , red marks are not secondary , just runs from netting as she was only harvested today . 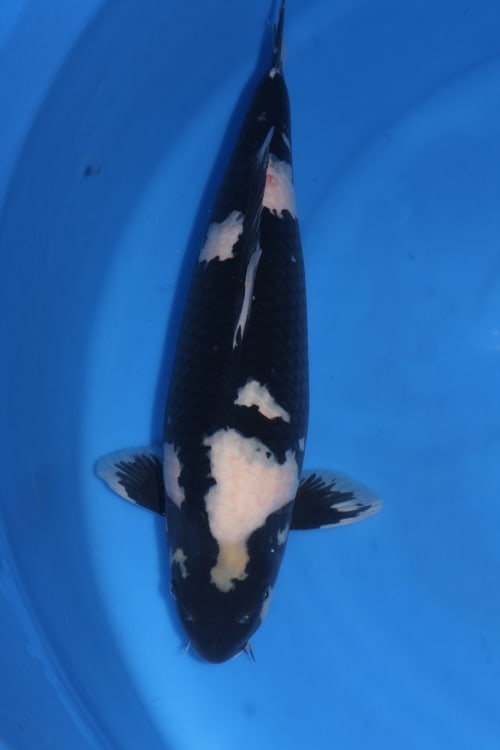 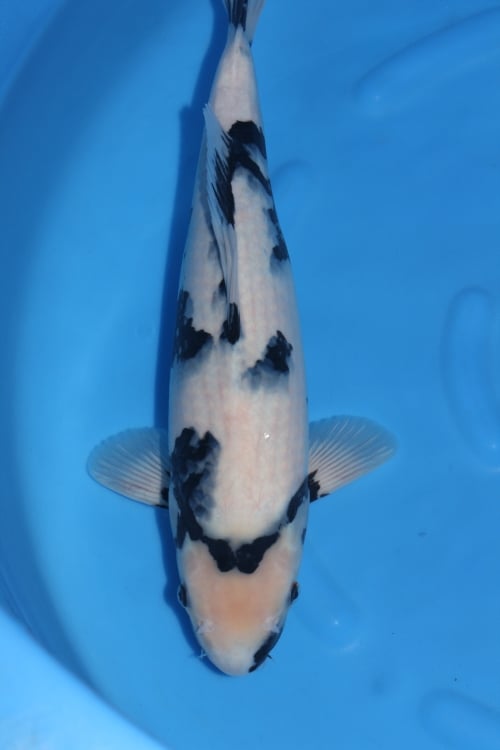 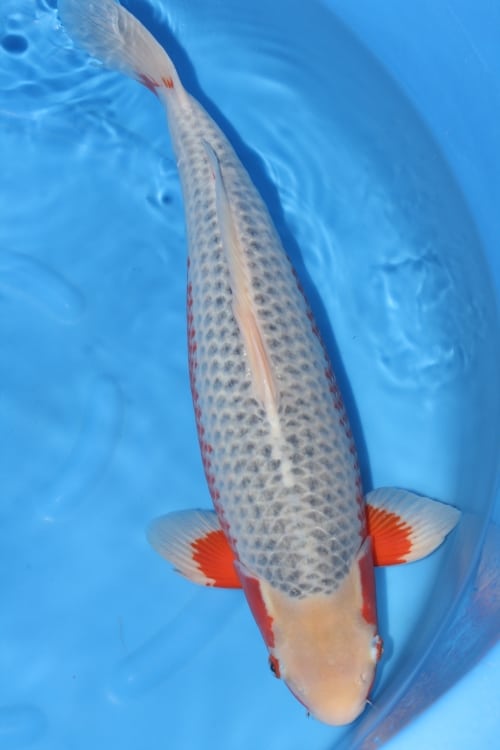 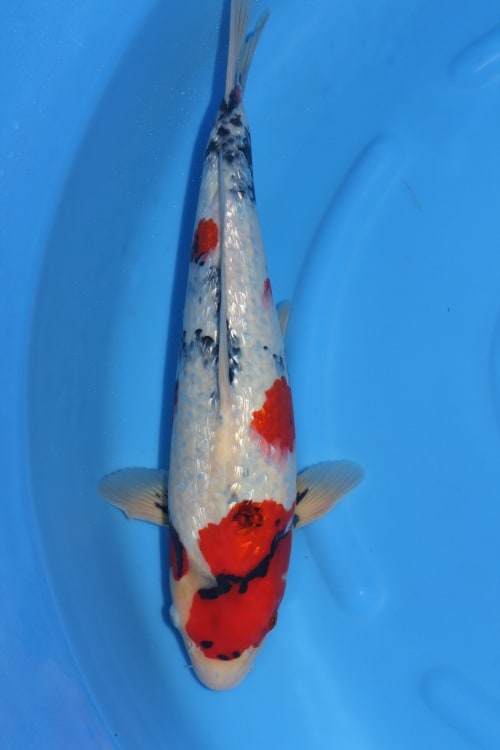 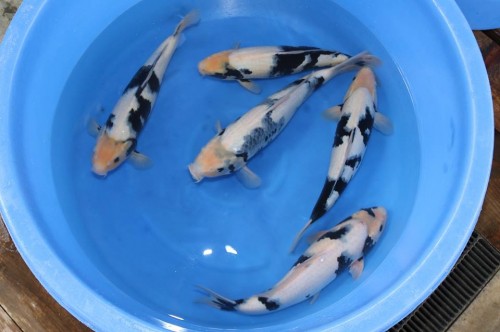 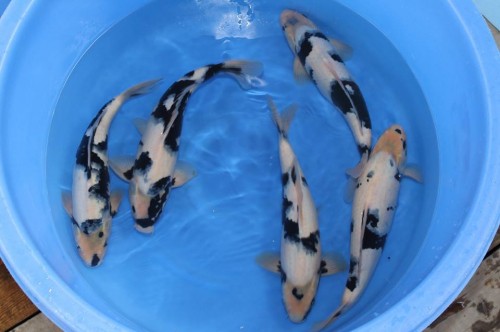 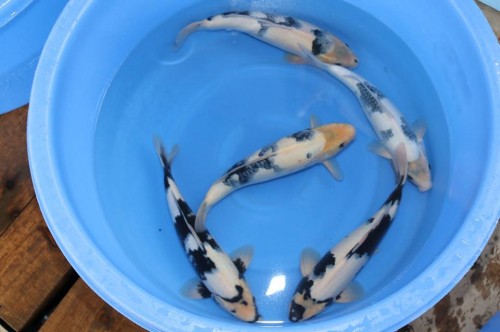 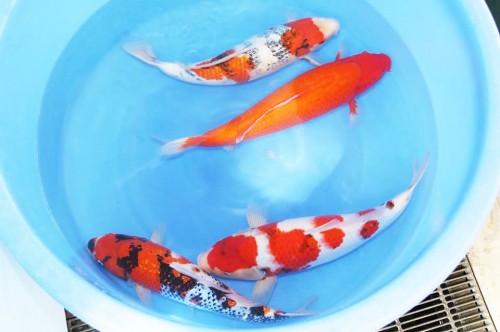 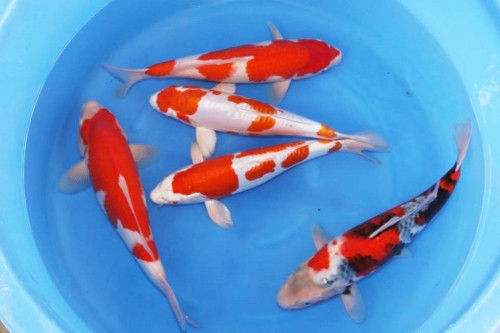 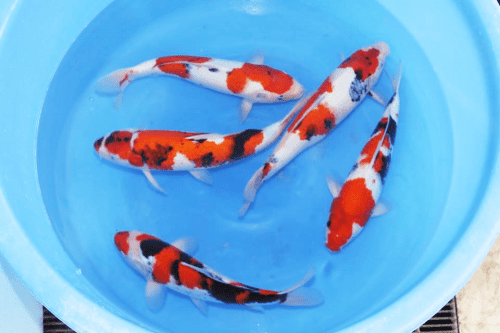 Well as you can see , pretty busy day . all these koi have been purchased and will come back to the uk in the next few weeks . First thing tomorrow we are off looking for some different and more unusual varieties , so see you all then ...............