I was looking forward to today , we were going to visit a couple of breeders we havnt dealt the before , or for a long time . First up was Marusaka , known for kujaku , juimbei sanke and his weird and wonderful doitsu varietys . I havnt bought here for a few years as I find that you need to be here at the right time to get some good fish at the right time . This time it was right for me , and I soon had some nisai kujaku , doitsu hariwake , gin rin Kujaku , sanke and tancho sanke among others.

A great drive over the mountains to go in the direction of koide , to visit some different breeders . First one we came to was Kobyashi , very nice guy , does some very nice shiro utsuri , but on this occasion nothing there for us . Quick snack on the way to the next breeder found us arriving bang on time for our next visit Takahashi . If im honest I was a bit disappointed on arrival as this guy does some very nice showa , but he had harvested very little , and as usual the sold nets looked full of some very nice koi . What he did have was some very nice nisai around 30-40cm , ochiba , doitsiu ochiba , beni kumonryu and many many others . I started cathing up some nice examples , including a koyo which I havnt seen in ages , they are usually  like ochiba patterns , but yellow and light blue , very different and I cant see them hanging around for long ! 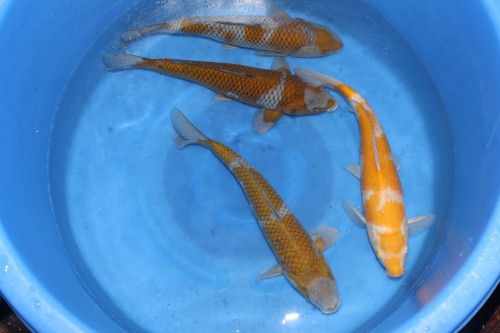 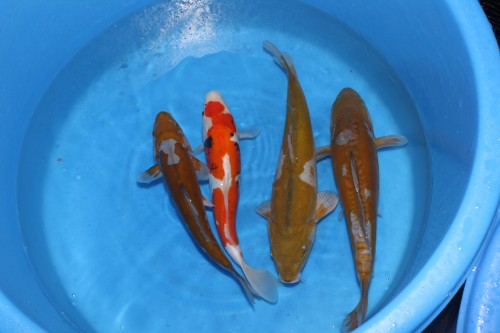 I havnt seem many good asgai this week , so with that in mind we wernt far from Wada who specialises in them . I also bought some tosai from him in the summer which were quite impressive , so knew he had good go sanke , so was really looking forward to seeing him . When you meet so many breeders in a visit , its hard to get an impression of people , but once again he  was really nice , nothing was too much trouble except the fact that he had very little asagi . He seemed a litte zany and ive never ever met any one who speaks as quick as him . He is harvesting 400 nisai asagi next week , but hacked off im not here then , but it was nice to meet him and see his fish , he also breeds Kujaku so he is certainly a breeder  to look out for .

We then travelled back to Ojiya and decided to visit Suda . He had many  go sanke , and to be honest some where very fairly priced , but he didn't do anything that I cant get at Maruhiro , and it helps our quarantine regime to keep to as less breeders as possible ! Not a bad day all in all , some new farms , and some unusual variietis purchased , tomorrow may be back to go sanke .