Last night , we finished very late , with a quick visit to chogoro koi farm , famed due to his brilliant white platinum ogons . Last night we popped past to see if he had many harvested yet . While we were there , he showed us some small metaics around 23-30cm , they looked ok , but i really wanted the platinums . Within minutes i am being gang pressed by the agent , the breeder and the worker , to at least have a look in the day light .

Breeders and agents , are not very pushy at all , so i was really thinking i was missing something her . Once out of the holding net , and into the day light , they looked a different ball game all together . Now metalics , seem to be growing in popularity , along with the price , so i was now thinking here comes the catch . But , to my surprise , very fair  so i asked how many , and how much to buy them all , the same was the reply . Now thats not the first time ive heard that this week , same explanation , he doesnt have many this year . Fair enough , ill pay the price and select . I soon started selecting , but it was hard as well as my pick , all three of them now wanted to share their opinions , and it was interesting what everyone thought was good and bad . I soon had 20 doitsu metalics , and it was time for the bigger nisai . In the nisai , there was a nice mix of other varieties as well as platinum ogons . Goshiki , shiro and gr shiro , ginga and gin rin ginga and doitsu platinum as well . First i selected 5 very nice platinum ogons , around 40-45cm , a little bigger than last year . Then i then found another 4 , but this time added a nice gin rin ginga , interesting looking fish , and not that common . Last box was a goshiki cross kujaku , nice pattern and lusture, but the photo lets it down , a gin rin shiro utsuri , doitysu platium ogon and a nice kikokoryu . I had an order for the latter , and was hoping it was female , but it wasnt .I asked Chogoro if it was possible to find one in a better quality one , that was female , he did , and it was exactly as the customer had asked for , but them he added another , less grey showing through , but miles better quality , and the breeder made no ends in explaining it , everything about it was way better than the other one with more colour showing , he then pointed to the male one , and said it would colour up like it , next year . There comes a time , when you have to listen to the breeder , if not , then why ask ???? So i returned the one with the pattern , and took the better quaity one , hoping the customer agrees with my choice ! Not a bad spend up by 10am at all , but i wasnt finished yet . Looking at the sansai , i saw an incredible pattern shiro utsuri , around 60cm , the sumi was up and i really liked it , it had a nice body , but it was reserved .He then showed me one that was way better, in the bowl she looked great , just under 60cm , with a nice , more subtle pattern and excellent skin quality . The price wasnt cheap , but very good value for money , and may be double at other breeders , we shook hands and the deal was done . Next he came out with calenders , towels and of course the compulsary chogoro pen ! Seems he was as happy as i was ! 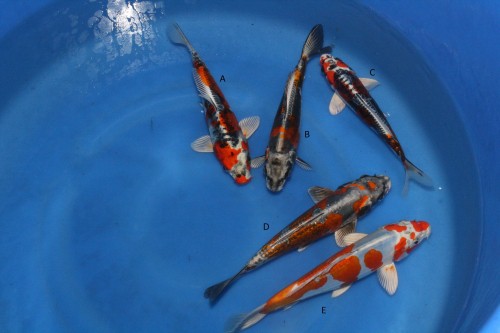 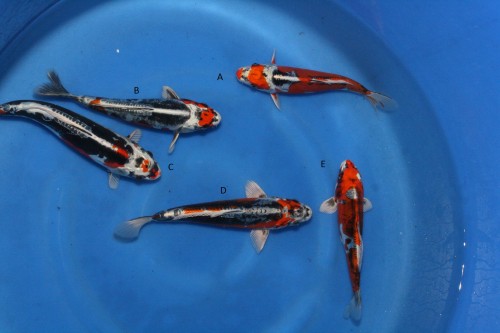 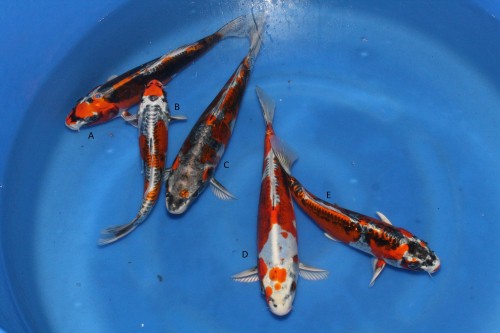 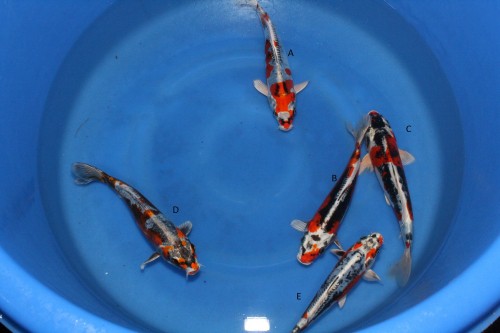 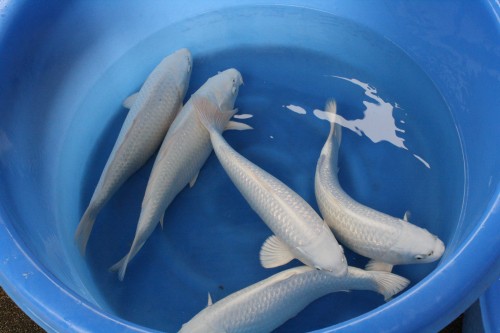 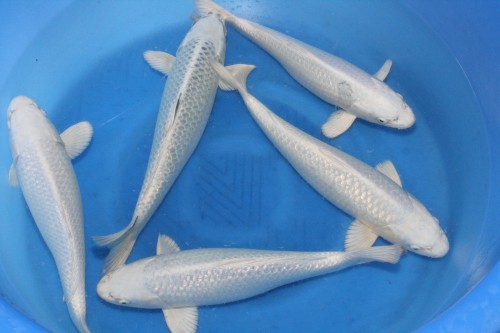 We had a drive around and visited Yamazaki , there was a big party in there , with new fish coming in , so we passed and visited Marusei .He was also very busy , but we had a look around , and he had some stunning asagi around 60-65cm , which we may go back and select from tomorrow . A quick look around the main fish house , and Marusei was already full of koi ! We visited Marasaka , who had an amazing collection of non go sanke nisai . But he a visitor , so we made an appointment to go back later that day . Lunch time was arriving so we took to the 7-11 as we were waiting for news from Kaneko about his next harvest . After lunch , he rang and said he was held up for an hour or so in traffic , coming back from the harvest . So with time on our hands , we popped into Marudo , most of the koi here were big and very expensive looking , and most of the other ponds were empty , so once again , we will return in a few days . While we were waiting for Kaneko , he said we could go and visit , the father was there , and we could start catching up koi . We arrived and had a cup of coffee with the father , who has a great sence of humour , a guy i have seen around the farm , was dressed very smart indeed , i asked if it was the tax man , he said no  , funeral director , he visits every day to see if im alive , i nearly choked on my coffee , even in his later years , he is still as sharp as ever ! So to the fish , i was shocked to see how many tanchos he had , and doitsu ones as well . I soon went through a few of the ponds , making up a box of mixed quality koi , i had two doitsu tancho kohaku , a stunning little gin rin kindai showa ,a doitsu ochiba and a superb looking scaled tancho as well .

By the time Kaneko had arrived , we had finished and all the fish moved . We had a look at some stunning very high quality sansai koi , but just a little out of reach today , especially after buying the sansai one at Chogoro !

We had to move on , as we had an appointment at Marasaka , great farm with many varieties , too many to mention .But famous for kujaku and Jimbei boodline sanke. I started bowling up some of the koi , and found a doitsu sanke , gin rin kujaku ,kikisui and then added a very nice doitsu kin showa from another pond . Very happy with the 7 nisai around 35cm . I stopped and sorted out the videos and pics . 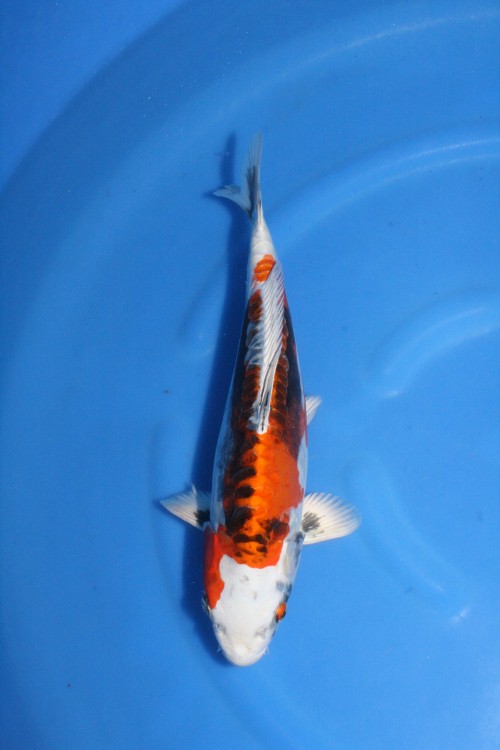 Nice kikisui , that would not behave in the bowl ! 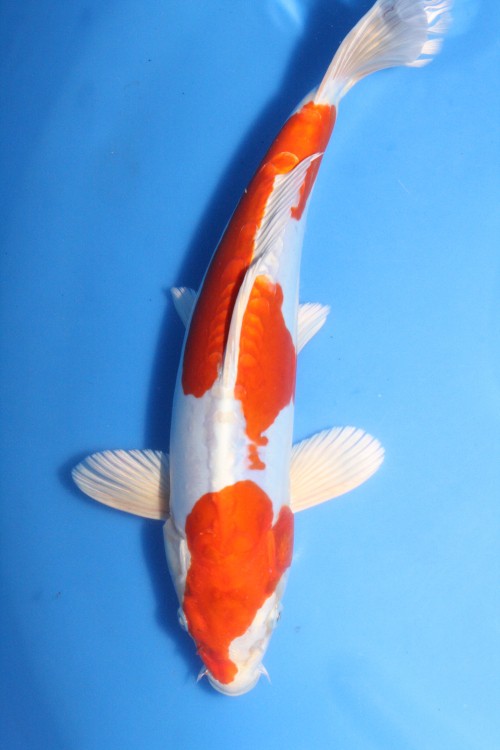 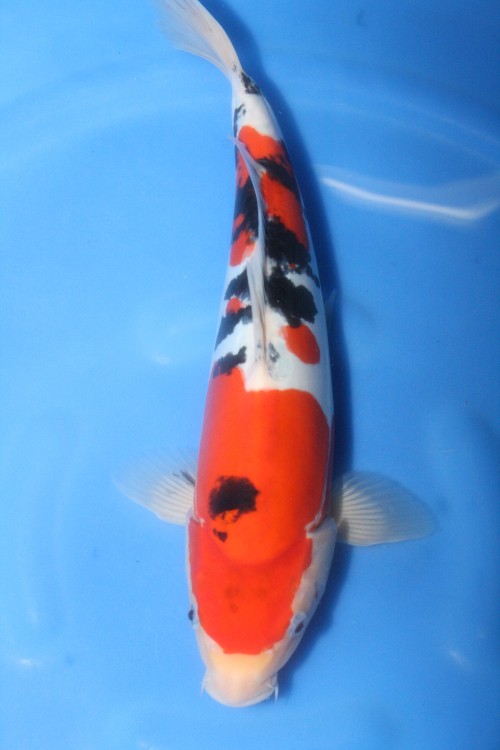 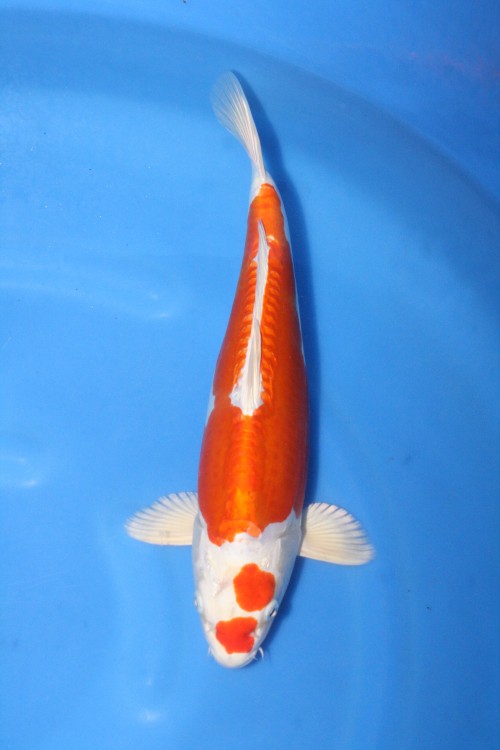 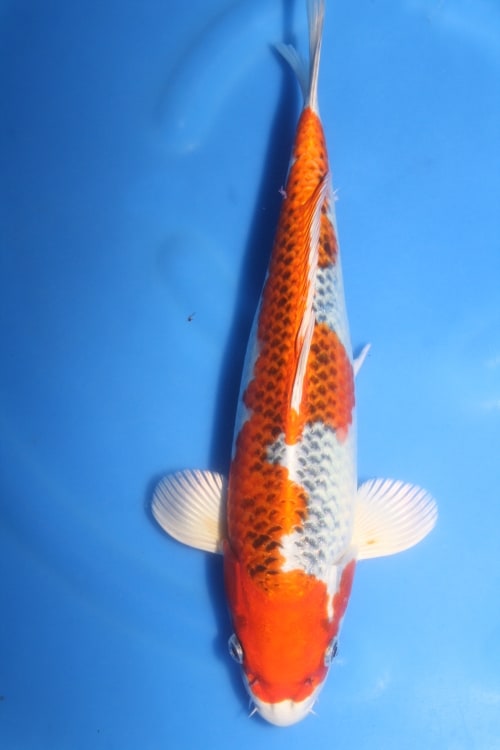 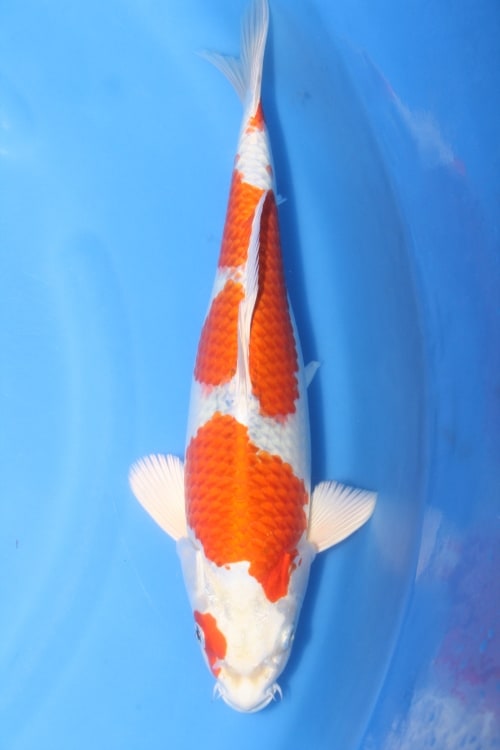 Gin rin kujaku , also wouldnt keep still , so couldnt get a pic with out the water rippling . 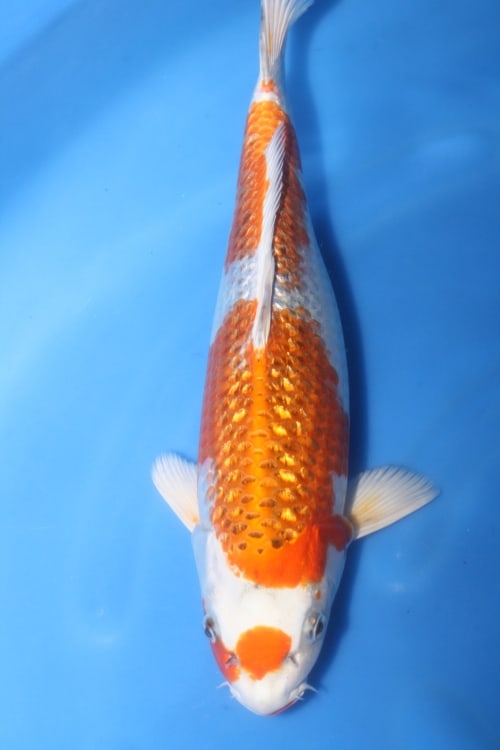 After this, we looked through the sansai , and there was some very nice sansai , which we have reserved untill tomorrow , to see in the full daylight .