First stop today , Shinoda koi farm . I heard he was totally sold out ,

so when I arrived their was tosai in all the for sale ponds , I thought my luck was in , and he had sorted out some tateshita . As we waited for the breeder , I was really in doitsu heaven , in one pond my mind had already bought 5 boxes , but when the breeder arrived , it turned out to be ALL tatgoi ! Ill be coming here for my first appointment in the autumn , that is for sure ! I was handed my card for my gold prize , and we were offered a cold drink , so accepted and had a chat . Shinoda then went into great length to discuss the problems of breeding doitsu , its hard to get the numbers from the spawning , I guess when your one of the best doitsu breeders in the world , where do you go for brood stock Also very difficult to produce doitsu koi that will grow past 65-70cm , and hold their quality . Another problem for him , is that a lot of doitsu can be very big bodied , and if he grows the nisai too quick, then you cant pack too many koi in a box for shipping , which makes the koi more expensive . The problems of being just a simple farmer eh Mark Gardner ! 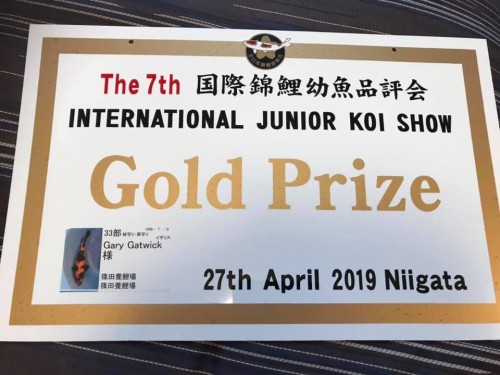 From here we visited Iwashita , this guy has some very serious koi . Incredible range of varieties , and the quality was outstanding . I bowled two goshiki , one male and one female , both sansai , but not cheap , and very hard to sell to the uk market . This were put back in the pond , and replaced by a stunning example of a beni kikokoryu , like a lot of people , I have been intrigued by their development , from a simple doitsu with black and colour , to some of the better examples that just shine like gold . I new as soon as I saw this , it was out of my league , when the price was given , it was way out of my league ! So once again , replaced very quickly . We joined the breeder for a coffee , I knew from the past , that he was good friends with my agent , so it wouldn't be a five minute job , and off they went jabbering at a speed I couldn't even pick out words , let alone try and translate with my little Japanese ! So I drunk my coffee and my mind drifted off , and stared thinking about the doitsu sanke I had seen yesterday , another koi just out of reach , but I was hatching  plan ………….

From here we left the Mushigame area bound for Oofuchi, but with a quick stop to look at Izumiya , to see if he had any ogons left .He had one , but the breeder wasn't there , so we opted for the 7-11 , and then to head over to Oofuchi , to see what nisai he had left . When I arrived , I was shocked at how many nisai he had , some very nice stuff indeed . For those who follow my blogs , will know that I am a big fan of their koi . In the Autumn you can buy sansai and older , at prices that wont break the bank .Even show class koi , that wont run into the many 1000 pound price tag . With this in mind , I struggle to buy his nisai , as they are getting bigger , and more expensive to ship . But I know in May , if he has some left , you can buy at a greatly reduced price . A price dicussed for 5 boxes , I was happy and they started netting the ponds to select , which is great , as the ponds are very deep , and once a net goes in , the koi are gone down and hard to catch . Using a seine net was by far a better quicker option. I soon had many nisai in the bowls and went from pond to pond selecting and making up boxes . We arrived at a pond , and I could see Oofuchi was a little unhappy to net it , it was explained that this was a more expansive pond , and at first I was a little disappointed , a deal was a deal ? But these guys are always fair with me , so agreed to just get the prices as we went through , and pay a little more . Once the pond was netted , I could see way , the quality was much better , and the koi were huge buy his nisai standard , normally 30-40cm , but these were 40 plus , at first I thought ah , these are sansai , but when I said that he shook his head , and said nisai . I soon had three stunning doistu hariwake , a doistu kujaku and a very nice kohaku .  price was agreed , and I was more than happy , sometimes you just have to go with the flow , and I said before , this breeder always looks after us . We then purchased 6 sansai , 3 doitsu platinum ogons , one kujaku , a doitsu hariwake and a very nice kindai showa . As I write this , I have had to use the videos to remember what varities we selected in the nisai ponds , kujkau , doitsu kujaku , tancho sanke , beni kikokoryu , kohaku , sanke , showa , tancho kujaku , tancho ochiba , ochiba , hajiro , sumi nagashi , doitsu hariwake , aigoromo , budo goromo , shusui , doitsu platinum and a sumi sakuara ( new variety ) .

Not bad for an hour or twos work

Most breeders are a fair drive from Oofuchi , but where we join the main road , it was on the way to Takahashi , so we decided to pop back and take a look at the doitsu sanke a took a video of the other day . There was nothing I diddnt like about this koi , except for the obvious , but saying that , it still wasn't an obscene amount of money for the quality of the koi ! On my last visit , we were offered a hand select of tosai , so I decided to bundle the whole deal together . If I selected two boxes , they would net the pond , and there looked to be some very nice koi in there . So we then went to the main pond , and started bowling uo some other doistsu examples . I soon had another two that could all be shipped in one box . The discussion was made on the price , and no reduction at all on the three doitsu sansai , I was a little disappointed , but that changed when I was told the new price to select my 50 tosai , it was more discount than I wanted on the three sansai , carzy eh ? N discount on the three high grade koi , but more offered off on the tosai lol , I guess I know he understands , the doistu  were so valuable to him , he was making a point . Pics and vids of the sansai were done , and then we went off to net the tosai pond . I was soon selecting 16-20cm kohaku , doitsu go sanke , beni kumonryu and a few others . Once again , another fantastic day , and the agent paid for dinner twice in a row , so guess he was fairly haooy as well ! Tomorrow we will be going to Yamazaki to select through some new koi he ahs released for sale , Ozumi koi farm , Kase and of course Maruhiro ……………...