After visiting Yamamatsu yesterday , we were promised a hand selection of some very high grade tosai . At one point i considered buying the whole pond , but the money involved was outrageous , in fact , if im honest ,

even one box was getting that way ! I was told that i couldnt buy the whole pond , as some had been promised for azuakri for other customers . ( azukari is to leave koi to be returned to the mud ponds for the summer . ) So straight away i toyed with the idea of doing the same myself . Leaving tosai in Japan , can be a bit of a gamble ,as can leaving any koi , especially as the breeder wants nearly the price of a nisai for good tosai ! So as usual , the hobbyist in me won the argument , and the auto feeder was switched off , and an appointment was made today , to select said tosai , for return to the mud pond . We arrived at 9am in Mushigame , and Toshiuke was in there drinking coffee , and looked in no mood to be rushed yet lol . So i sat down and joined him , coffee was served , and he shocked me by saying , quick coffee and then we go . WOW , may be he had a few cups before i got there , no not that , he had a busy day clearing snow from around the fish houses a head , so needed to get a move on ! So ten minutes later , found us heading down to the tosai house . The pond we had chosen was netted , and the that came up were amazing .

Sakai is known for his sanke , his famous matsunoske bloodline , being the main stay of many breeders brood stock . So  the plan to get a few of them , but as youve read many times before , that plan went out the window . Dont get me wrong , the sanke were very nice indeed , but the kohaku were outstanding , and the bodies were much more impressive than their sanke counterparts . Toshiuke , is ,  as are most of the breeders , very proud of his koi , and was soon going through the pros and cons of some of the tosai . I soon had ten great tosai in the bowl , between 25 and 28cm . I was happy with the choice , and was then asked which ones i wanted to leave in Japan , i said all of them , Sakai shook his head , not possible , 5 only ! One thing you must understand , the breeders dont really want to look after koi this way , its considered a favour , by the time they pay the rent for their ponds , and the food , they dont earn much money out of it ! so i got my choice down to 7 , and that was it , there was none i wanted to leave , so i asked Sakai , which two to put back , he was thinking hard , and went through all of them with me again , and he said its difficult , they all have their good points , i gave a big sigh and shook my head , i wasnt getting any help here lol . Then he said the Japanese word for all , and offered me his hand , which i shook with great enthusiasm . I had 7 , very nice examples of Kohaku , sanke and one showa staying in Japan . The previous day , we spoke at great length about the uk Market , and Sakai is thinking about making a special promotion later in the season ,of very high grade tategoi to UK customers . So i thought why not pre empt this , with one of my own . So heres the deal , 7 tosai , very high grade , in the mud pond for the summer ,  the price will include VAT , shipping and mud pond keeping fees . All the fish are hoped to be female . As usual , there is  risk with leaving  koi , but we will take some of that out for you . So however the koi come out , the koi is yours , ie if male or not as good as we had hoped , then,  thats azuakri and you have to accept it . BUT , if the koi has any major problems , or doesnt come out of the mud pond , we will replace the koi to the same value you paid , and you can choose it off the website . The price will be £995 each . Now remember , you are not buying a tosai , well you are , but what your getting , is a nisai landed in the uk , which should be over 50cm ! If these koi come out as good as hoped , and are female , then you have had FANTASTIC value for money , even if some should turn out male , with this kind of quality , then you still have done very well . I think this is a great opportunity , for people that have wanted to leave a koi in Japan , but have thought the cost out of reach , or the risk too much . So there you have it , first come first served ...............

Seven Yamamatsu tosai for Azukari . These will be found on the website later with videos . They are now around 25-30cm

Feeling happy with myself , i went in search of more koi . I came across a pond of kohaku and gin rin kohaku . and a few tanchos ! Around 14-16cm , they diddnt look too bad, so i asked the price , and then i asked to buy the whole pond , a few hundred i think it was , a better price was given , and another deal done . Please note the larger tanchos in video are not included as they were already sold .

After saying our good byes , we left for our next appointment , we were driving for a few minutes , and the agent asked where are we going , i looked at him and laughed , we were so tied up with what was going on , we hadnt planned anything else ! So various breeders were called , Kanno , Okadan but were all busy . So we decided as the weather was better , we would head over to Oofuchi , as his nisai were now for sale , and to see the tosai . When we got there , it was great to see his tosai , as i am a big fan of this farm . I was not to be disappointed , the varieties were incredible , go sanke , hariwake , goshiki , metalics , ochibas and many more . Ive never known this breeder offer hand picking , but what he does , is offers his own selection for more money , so i think ill be taking that option . It was now time for nisai , a short drive , a walk through some massive snow drifts , and a quick tumble into one of them , which took a big effort on my part to get out ! every time you try to put your hand somewhere to support , your hands sink in the snow , much to the amusement of the breeder and agent , who were too busy taking pictured to stop and help . So back to the koi , the ponds where full  and it was giant version of the tosai house . The amount of different koi was stunning  and his go sanke , get better every year . The price was given , and it was fair , so we started looking through the ponds , so many fish to select . One thing i did notice , that his koi seemed to be  bigger again , now some may say thats great , but when shipping them halve way round the world , this cost has to be taken in to consideration .So thats where my perfect day fell apart , the koi i was looking at selecting were 40-45cm , so only five in a box , this made them kind of hard to sell in the uk , please note , this doesnt mean that Oofuchi was expensive , he wasnt , it was just where the cost of the koi with the shipping diddnt work out right for me , so feeling a bit gutted , we thanked the breeder for his time , and left to meet Maruhiro for lunch . Hinori san , is one of the happiest guys you could meet in the industry , he is always laughing and joking , and makes business with him a pleasure .

Although we diddnt purchase at Oofuchi today , we have had these four sansai on order from a few weeks ago , and will be shipped this month . Sansai , female and all 55-60cm approx

After lunch , we returned to the farm , and selected from some of his cheaper nisai ponds . I got a few koi in the bowls , and looked at them , and felt that i was struggling a little , so stopped and returned them to the ponds . I then went with a net , to the two best ponds , and asked his staff to get a big bowl , Hinori was serving another customer , he saw me , we  both grinned , as we knew what was coming next ! Its almost a tradition now , that at the end of the week , we do a serious purchase on many koi in one go . Hinori made some recommendations , along with a few others we bowled them  At this time my friend  Jeroen from Holland joined us , and gave us a hand filing up the massive bowl with some great koi . I notice a flash of bright beni and started catching , or rather trying to catch , what looked like a nice showa . I missed it , my Dutch  friend missed it , there were so many koi in there , it was hard to find the koi agan . So Hinori got a net , and all three of us spent the 15 minutes catching this showa . When it was finally caught , Hinori appologised and said male , but i diddnt have the heart to put it back after all that effort , and it was very pretty koi ! We went to the bowl , and the fish looked great , he priced them all up and i was happy .So i did my usual trick , what about them all ???  A bit of bartering took place , and after a while , a price was agreed for the whole lot . Five very nice nisai all female except the showa , and six larger koi to stay in Japan . Time was getting on , and it was too late to take all the pictures and videos . So i did all the five nisai for shipping , and will return tomorrow , to do the azukari fish . As for them , there was  ......oh well that can wait for tomorrows blog lol ! Also got a few other things to look at , so look out for tomorrows blog .

Male showa , nisai and around 50cm . Skin quality is excellant . 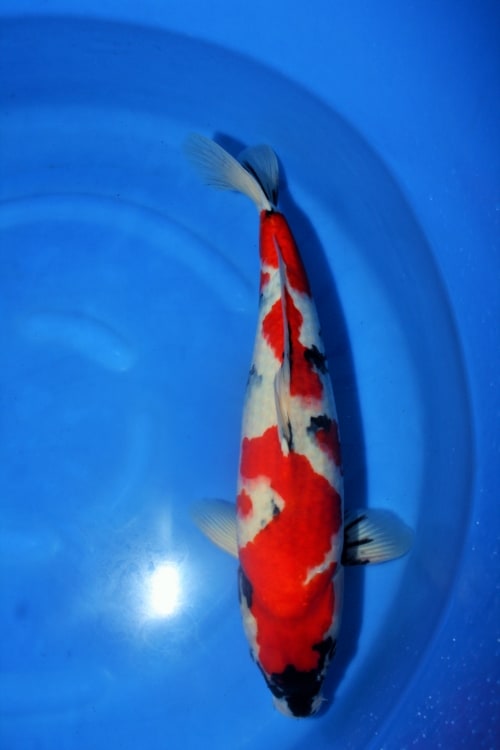 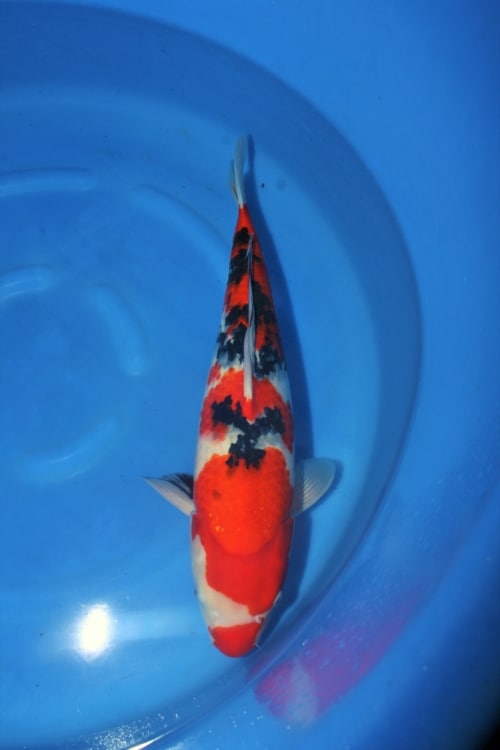 Female sanke , nisai and around 45cm . 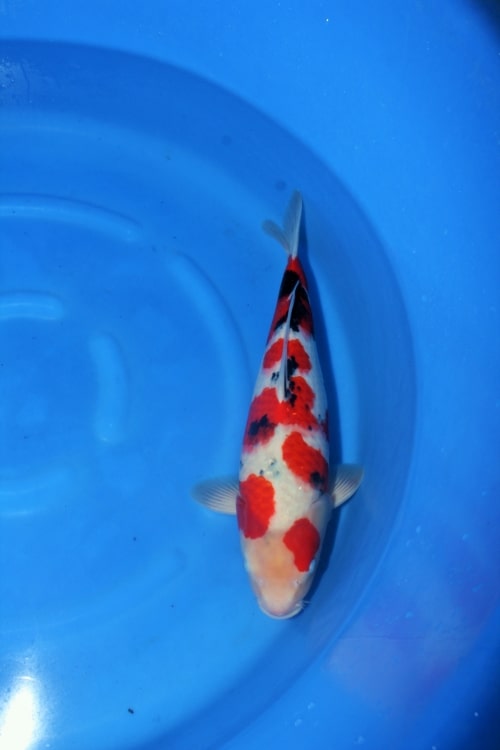 Female showa , around 50cm and nisai . 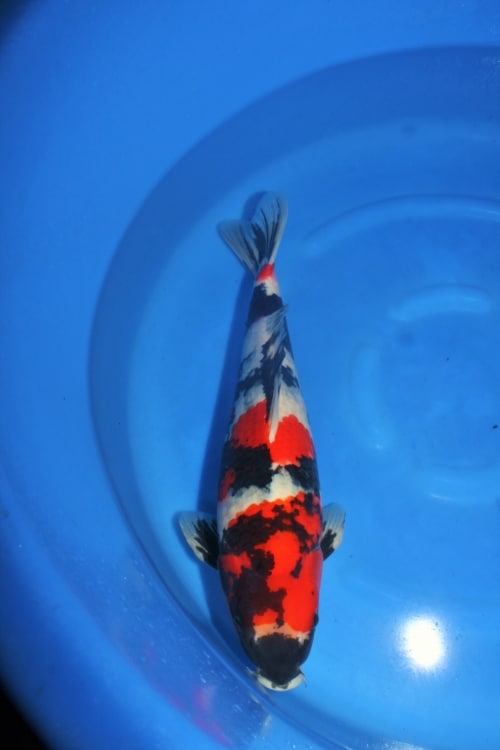 Female showa , around 45cm and nisai .Interesting this one , knowing how Maruhiro showa

sumi develops , this is one to watch ! 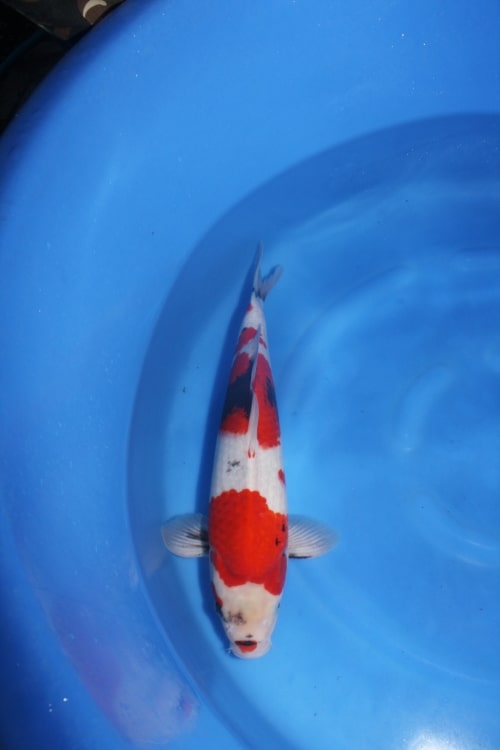