Its getting towards the end of the week now , ive bought quite a lot of koi , and thought id covered all bases , but had a few messages that the middle ground go sanke was a little light in the ground .Ie great koi over a £1000 , and lots of smaller under £300 , so I checked the website and thought they have a point we need to fill in that gap , its a tricky price bracket as it could cost nearly a £100 just to ship a nisai 50-55cm koi ! But I said ill try , so onwards with the hunt ! Two years ago I left a a nice sanke with Shintaro  , as I didn't make the harvest due to my accident , i didn't get round to seeing it , Saito had concerns that it was a little thin so i would need to check it . But i we never had time where we both could make it in the spring . When he arrived he showed me the sanke , it had returned it to the mudpond , and she had started growing again , and filled out a lot more , still not big bodied , but he was really pleased how she was looking , the skin was excellent and i was very happy with the results ! Very little sumi showing , but get it to the uk im sure that will turn around .

Great start to the day ! So looking around the farm we  where looking at some very nice sanke and showa , ive got one in mind , but a lot of meny involved so will return tomorrow after  another a little  think . While we were in the farm , Saito showed us some nisai at a price i thought was very reasonable , in fact so good i worked out it was the go sanke that would fill price bracket i was a little low on . Now before all of you go WHAT ???? Shintaro koi at cheap prices and rush to get your credit cards , i will say this , they are obviously not his high grade koi , he hasn't had a change of heart and giving stuff away , these are nice koi , nice quality and at a very good price . He even tried to sex then for us , but that's is sold as only a guide line ! So i soon had a nice bowl of four nisai including showa , sanke , and even a tancho showa , took pics and looked at what i had left in the other bowl and soon had another 4 in the photo bowl , once again i looked back and saw two more koi i didn't want to leave behind , so went back into the pond and bought another 4 !  12 nice nisai and all at a price i was very happy with , seriously thinking about the showa we bowled while there , may have to go back again . sorry about the water ripples , made a couple of them look a little odd , all koi are ok ! 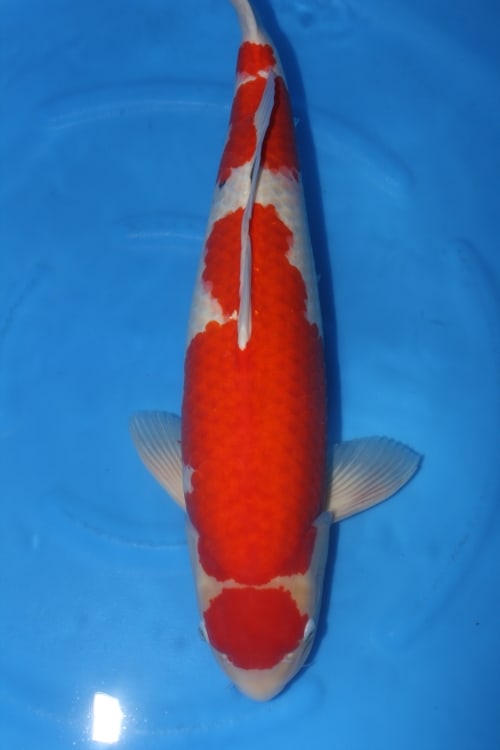 As we were in Mushigame , and needed a coffee , we decided to go into Yagenji as we need to find some asagi and i knew he had harvested a few hundred nisai , i had a good look  around and thought i could get a few nice ones by going through all the different ponds to make a box . They were quiet clean and had very good bodies for nisai , around 45-50cm some of them . My attention was then caught by some one calling my name , i turned round and saw Gary Pritchard and Alan Coogan , we started chatting , then we had a coffee and started chatting some more , after that we chatted some more and realised that an hour had passed and we were late for our appointment as Hosokai , so saying our good byes we drove down the mountain at a fair rate of knots as we both hate being late , this is the breeders busiest time of the year , and they don't want to be waiting around when they could be serving others or harvesting . After driving through Ojiya , grabbing a sandwich , and flying back up the other mountains like wacky racers  , we pulled up at Hosokai with a minute spare . Good job didn't need anything at Yagenji i said , and then swore out loud , we  had forgotten to get some asagi , so busy jaw aching with Gary and Alan we had actually forgotten to do what we went to Yagenji for lol ! Oh well , tomorrows  just another day , and its always good to catch up with old friends .

Ive left two shiros at Hosokai , one was now yonsai ( 4 YEAR ) and one is now sansai ( 3 yr ) . The yonsai was in the main pond down stairs , the quality was good even though there was a few slight secondary issues , skin and sumi looked good even though it was stressed from harvesting , but she had grown again  , 52 at nisai , 65 at sansai and now a wooping great 74cm at yonsai , not bad for a shiro utsuri ! Still think she will be a very big shiro , so if any one wants to give it a go let me know ! Lat year i also left a small nisai aroud 40cm with him , i like the pattern and the skin was great . The breeder was a little disappointed , he said she only grew to 53cm , so he went and got her and placed it in a bowl . The body hadn't filled out so much , but she grown 13 odd cm so i was really pleased , we needed another koi to pack in the box , so i just asked for his recommendation , he placed a 57cm sansai shiro in another bowl , a price was agreed and threes shiros on there  way back to the uk . Try as i could neither shiro would behave in separate bowls for pics , so they were placed together in one bowl and they calmed down immediately , so a joint pic was taken , the skin on these were excellent , so again not too bad a result for our azuaki koi !

Ive got a lot of decisions to make at Maruhiro , as you may have heard we have had some very good results from the harvest of our azuakri koi there , so we needed to sit down and have a chat about what to do with what koi . so we has an apt at 4pm , by the time we got there , a quite strong crowd from all over the world had gathered waiting for his harvest of bigger koi , so we decided to leave him to it and return to the hotel. Not a bad day at all !!!!!!!!!!!! Sorry about the pics , fish were really moving about and a lot of water ripples , body shapes are fine ! 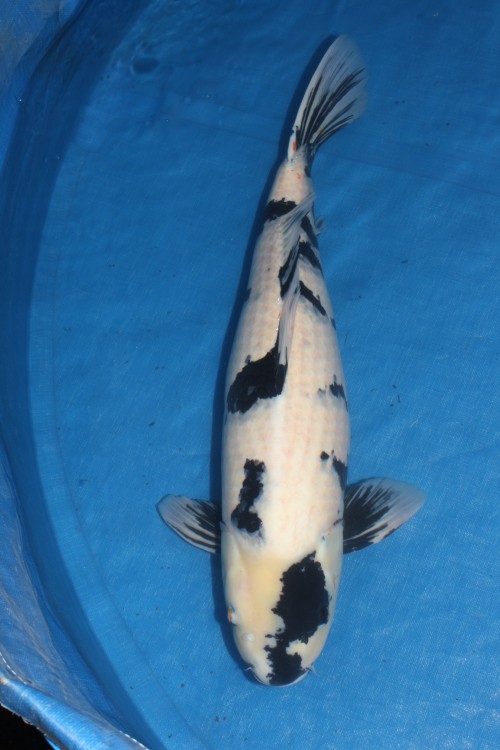 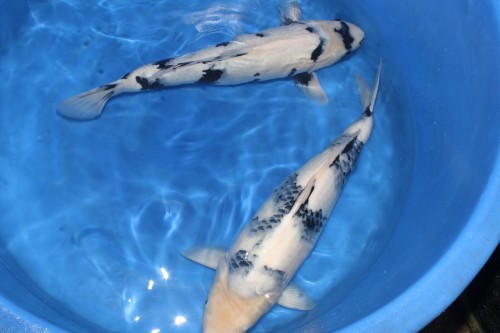