Today , we arrived at Oofuchi a little early , and was horrified to find someone there already , bit gutted i walked and and asked who it was , and a bold Norfolk accent sounded out ,  dont worry Gary , we will leave some koi for you ! As i looked around the main pond , there was Andrew and Chris from Selective koi , and they were catching up all MY kujaku  !!!!!!!!!!!!!! Bug hand shakes all round , a quick catch up , and we let them get on .They were running late , and we had arrived early  , so we waited until they had finished , and then got stuck in !

All joking aside , its always great to see the lads , we go back nearly 30 years , when we all did the koi shows , but i am serious , they did take most of the Kujaku lol ! So looking at what was in the pond , i managed to get a few Kujaku , tancho , tancho sanke and a stunning doitsu kujaku .I started look at the gosanke , and not much caught my eye  , except a kohaku with a pleasing two step pattern , and nice tale stop . Knowing that Oofuchi uses Dainichi bloodline , i added that into the bowl . The normal size of Oofuchi sansai were around 40-50cm , nice price , and not to heavy on the packing price . With 7 koi in bowls , i know we had to buy more to get a good deal here , so i looked at the bigger sansai , knowing they would be one or two in a box  , it was going to be a little more expensive visit than i thought . I soon bowled up 6 larger sansai 58-60cm , two aigoromo of nice quality . Although one was a little light on pattern , the skin was awsome ! A really nice shusui was added to the mix , along with two beni kikokoryu , and a nice ki kikokoryu . Still not enough koi , so went back for the smaller sansai , and found 4 more aigoromo , kikokoryu , a doitsu tancho kikisui  and another beni kikokoryu . I didnt think these would be so good , so diddnt take much notice , a deal was struck , and the last 7 sansai were given at a very good rate indeed , so i was happier , but even happier when i removed the covers to take videos and pics , they were very nice , and all were purchased !

After leaving Oofuchi , we headed back to Ojiya , and then planned to head up to Shinoda , where we knew he was harvesting hi utsuri . As we neared Ojiya city , we passed the the place that did fried liver and special fried rice , so with time to spare , we went in and saved us from lunch at the 7-11 . Even after having a cooked lunch , we still arrived early at Shinoda , to find someone already there and selecting koi , the title of the blog today was hectic , and it surely is , and will probably get worse ! The guys that were there were already buying doitsu and gin rin , and looked like they were just finishing  which left us with a whole new pond of freshly harvested nisai hi utsuri . Prices were given , over the whole range , and although we had bought their yesterday , its important to check , as a new harvest brings in new quality , which almost certainly means a new price ! This time everything was the same , but with plenty more koi to look through . First of all we selected many nisai hi utsuri , this were around 40-45cm , and some even bigger . We also selected a box , that the breeder tried to sex as all male , but as you know , or will need to know , sometimes even the breeders struggle with Nisai to sex them . We went through all the ponds of various qualities , and made box after box , with around 20 hi usturi , some more doitsu go sanke and a few gin rins , i looked at the best nisai pond and selected a female nisai showa , she was lovely , and that made up our final box , and it was time to move on again .

Leaving Shinoda , i couldnt help feeling that we had already had a good day , even if we diddnt bow another koi for the rest of the day ! So we wound down our way   through the valley to Sakazume . Yesterday i purchased two Yamabuki ogons , which the breeder hoped to be female .They were on the website for a short while , and both sold straight away , with a lot of people asking about them .So to round the day off and get back to the hotel , and get some work done , i thought quickly pop in and get some more if he had any left ! Talk about timing , for those who have been in Sakazume , the mud pond opposite was just being harvested , and guess what it contained ! Yes 105 Yamabuki nisai ogons . The koi business is a lot about money and relationships , sometimes it can be about just being in the right place at the bloody right time ! This was just pure luck , no more no less . We had to wait about 20 minutes while they finished , and we then selected another 5 nisai ogons , which between us we all thought were female and again all around 45cm . We finished and was about to leave , when he pointed to a pond and said Atarashi , which is Japanese for new , so net and bowl back out , and we soon had some nsiai to select through . I settled on a kin matsuba , with a really deep metalic lustre , two very nice aigoromo , another one that was very high quality , a gin rin shiro utsuri , although diddnt have the sumi through yet , i thought was worth a gamble due to the heavy pattern . Then a scaled ki juro , i have customers who have asked for them , but normally only seen doitsu ones , but i have to offer this to my customer who has been waiting for one for ages , it will go on the website but be reserved until i have spoken to him . 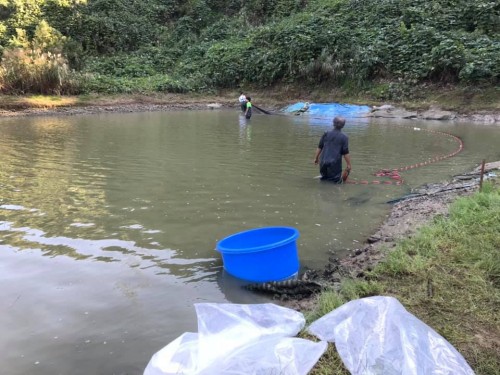 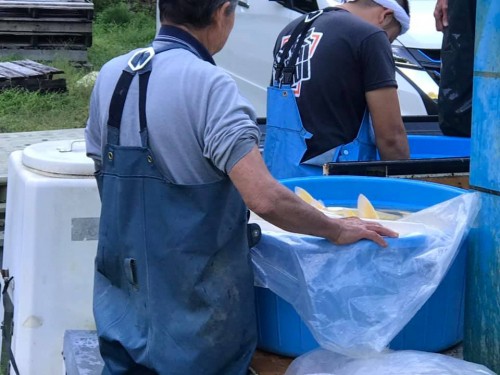